Meeting of Pope Francis and Hollande: What Was Discussed? 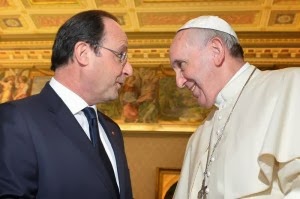 (Vatican) On Friday  French President François Hollande paid the leader of the Catholic Church visit. Little was known about the contents of the conversation between  Pope Francis and the neo-Jacobins in the Elysee Palace. For 35 minutes the French socialist leader spoke with Pope Francis, which was then followed by a conversation with the new Monsignor Pietro Parolin Vatican Secretary of State and "foreign minister" Monsignor Dominique Mamberti. It was the first such meeting for Hollande since his election as head of state in May 2012. What did the two heads of state talk about and especially how did they talk about it?

In a close and diplomatically written communiqués by the Press Office of the Holy See from early Friday afternoon it is being described as a "cordial discussions."  It contains  the emphasis of "good relations" between France and the Holy See and the mutual commitment to a regular dialogue between the state and the Catholic Church. Similarly,there is the willingness to work constructively on issues of common interest.
According to Vatican, "the defense and promotion of" human dignity, respect for religious communities, bioethics, the family and the protection of places of worship were  questions addressed during the interview.  Furthermore, international issues were the subject of the meeting: poverty, development aid, immigration and the environment. In particular, the situation in the Middle East and some parts of Africa was discussed and the hope was expressed   that peaceful social coexistence could be restored through dialogue and participation of all sections of society with the same respect and equal rights for all, especially the ethnic and religious minorities  Such was the statement of the Vatican.

François Hollande later gave a statement to the press  to the Institut français near Piazza Navona. He apparently asked the Vatican to receive an opposition "Syrian coalition." "The Geneva Conference should concentrate on the transition process. We must do everything possible to stop the fighting and to strengthen the humanitarian mission." The French President insisted, with the Pope, that he has shared the "same concern as the Pope" for the Christian minority in the Middle East. France is committed to ensuring that the Christians of the Orient remain where they have always lived and not go their way into exile because of the struggles taking place. The Christians of the Orient everywhere must be supported and protected."  Hollande also took claim that France "everywhere defends freedom of religion ", as it is the "homeland of the freedom of conscience" and they defend against any anti-religious act." The host at the Élysée Palace also announced that he has spoken with Pope Francis on  "climate change", because France had planned a conference on the topic in Paris for the coming year. He confirmed that Pope Bergoglio is preparing a text on the subject of environment.
There was no posititon taken on Hollande, to criticize his private life and his relationship with the actress Julie Gayet and with his official partner Valerie Trierweiler, which deal with the crisis of the media, especially in France. The Catholic French newspaper La Vie wrote shortly before Hollande's visit to the Vatican that  "a Superstar Pope receives a president who is at the low point of his popularity."

French Catholics Waiting in Vain for a Public Signal

French Catholics have waited anxiously for what would be said during the visit regarding the hard-fought Kulturkampf by the Hollande government. In France, the socialist government operates a socio-political revolution by the promotion of homosexuality through the "gay marriage" ( Mariage pour tous ) and the gender ideology and through an open struggle for the elimination of the Catholic Church from public life.  But the Vatican did  not  enact any position, certainly not toward Hollande. The president presented himself as a defender of religious freedom, which was felt to be open mockery by  Catholics in France. In Comuniques of the Holy See, the socio-political and bioethical conflict are summarily listed without addressing the content thereon. Hollande didn't really  mention it. The contrasts in the Syrian conflict were not mentioned by both sides. The Vatican violently criticized last fall  Hollande's determination to intervene in Syria to support the U.S. military in favor of the rebels.

Before the meeting, more than 110,000 French Catholics appealed to Pope Francis, to bring "clear words", to the anti-Catholic Kulturkampf of the neo-Jacobin government and to renew criticism of the promotion of abortion, euthanasia, surrogacy and homosexuality (see separate report Pope Francis receives François Hollande - 100,000 Catholics ask pope to "clear language" ). A few days earlier, the most active apostolic nuncio to France, Archbishop Luigi Ventura,  conveyed a message of greeting from the Pope to the participants of this year's March for life in Paris. A posture that could not but go unnoticed in the Elysee Palace.
President Hollande brought the French priest Georges Vandenbeusch in his delegation to  the Vatican. The priest was kidnapped in Cameroon and held for several weeks. He had been released because of the diplomatic efforts of France recently. The encounter between Vandenbeusch and the Pope had been a particularly heartfelt during the audience, as the Pope embraced Vandenbeusch  spontaneously.

Interior Minister Manuel Valls, the "hard fist" against Catholic opposition to the Vatican

Part of Hollande's delegation was also France's Interior Minister Manuel Valls, who  brought to life the Catholic civil rights movement Manif pour tous,  is blamed for the hard fist used against opponents of left-liberal restructuring of society (see report France Approves Gay "Marriage" - Make Catholic Rallies of Secularism  and Left Iritability: Another Arresting the Peaceful "Veilleurs" whose "Weapon" is Freedom of Speech and the Rosary  and  Violence of the French government and Police Against "Gay Marriage" Opponents Brought to UN Human Rights Council ). The civil rights movement was also present in Rome. They "welcomed" the French president with a huge banner similar to the logo  logo Manif pour tous in the Piazza del Popolo, near the Vatican. For the second February they are planning to return to the streets with simultaneous rallies in Paris, Brussels, Madrid, Warsaw, Rome, Bucharest and Lyon.
Hollande gave the Pope a book on Saint Francis of Assisi: "This is also your patron," joked the Pope.
Text: Giuseppe Nardi
image: Vatican Insider / tempos


Link to Katholisches...
AMGD
Posted by Tancred at 7:11 PM

I guess 100,000 Catholics begging Francis for clarity didn't get a scrap from the current Vatican.
I can only wonder the love fest that will occur when our baby killer in chief, Barack Hussein Obama meets with Francis. Probably more pablum on "climate change". Does Francis even know the climate change garbage is a Marxist lie to force earth worship and population control?

I heard about this. Pretty wild. Seagulls can be aggressive but crows? Never! And to have a gull and a crow...land bird and sea bird...tag team against two doves is beyond strange.

Expect nothing Roman Catholic from the liberal modernist papacies. They are all Hell bent on destroying Sacred Tradition in the liturgy and in dogmatic processes. Earth tremors, lightning strikes, papal doves symbolically attacked; JP II's phony unholy relics stolen and declining church attendances with vocations still falling are signs adequate enough to demonstrate a church bankrupted of any moral authority perched dangerously on the edge of implosion. And the abuses continue unabated.