Bishop Kurt Krenn -- "Concern for the Church Determined His Life"

Edit: Today, and its vigil, is a day on which Austria has lost two great patriots and defenders of the Church.  Perhaps it is providential that Bishop Kurt Krenn now shares the day with Dietrich von Hildebrand, who passed away in 1977 on the 26th of January.  He was himself a tireless lion of the Faith, a polarizing figure and wrote:

The drivel of heretics, both priests and laymen, is tolerated; the bishops tacitly acquiesce to the poisoning of the faithful. But they want to silence the faithful believers who take up the cause of orthodoxy. [Thanks to societasregnumchristi.]

(St. Pölten) The Austrian Diocese of Sankt Pölten published an obituary by Bishop Klaus Küng on Former Bishop Kurt Krenn his predecessor, who passed away on Saturday at 20:17 after a long illness at the  age of 78.  Bishop Kurt Krenn was Auxiliary Bishop of the Archdiocese of Vienna from 1987 to 1991  and from 1991 to 2004 the Diocesan Bishop of St. Pölten. Bishop Krenn, a staunch defender of the Church, then yielded, almost ten years ago, on the 29th of September 2004 when he was informed by the already seriously ill Pope John Paul II, that he wished for his resignation. Krenn obeyed, resigned, and has since led a reclusive life, increasingly marked by the illness of a broken fighter. A courageous warrior, on whom great injustice was inflicted, he was an intrepid Catholic voice that was brought too soon to silence. We document  the opinion of Bishop Klaus Küng on the death of Bishop Kurt Krenn. 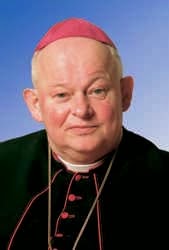 "Concern for the Church has Determined his Life"

"Looking back on every life there is light and shadow," said Bishop Küng, "and sometimes it comes  in considering a controversial man  where one has to decide where the light ends and the shadow begins.  Bishop Kurt may have had weaknesses, his appearances and utterances must have irritated some people, yes, annoyed and offended. We also do not forget that his concern  for the Church and Her mission determined his life. In this respect, he can be a role model for each and every one of us."
Kurt Krenn was born on 28 June 1936 in Rannariedl (Upper Austria), the second in a family of six children of the teacher Karl Krenn, who died in the war. He graduated from elementary school in Oberkappel and high school in Schlierbach. In 1954 he entered the seminary Linz and studied theology first at the Philosophical-Theological Educational Institute Linz, then philosophy and theology at the Gregorian University and Canon Law at the Lateran University in Rome.
On 7 October 1962, he was ordained in the Church of St. Ignatius in Rome as a priest. This was followed by studies in Tübingen and Munich, where he worked from 1966 - 1970  as an assistant at the Faculty of Theology. 1970 - 1975 he was a professor of philosophy at the Philosophical-Theological College in Linz and for 3 semesters a lecturer at the Theological College of St. Pölten, 1975, he became appointed a full professor in the Department of "Systematic Theology" at the Faculty of the Catholic Theological Faculty at the University of Regensburg.
"As a professor, he was adored by quite a few," recalls Bishop Küng. "His manner of performance was distinguished by clarity and depth with the special ability to show the big picture as well as with references to  current problems. He had a very good memory and a brilliant  gift for formulation, was  very approachable in conversation, even with ordinary people. He was distinguished by his love for conversation. "
Krenn has eager to help  pastorally during  his time in Regensburg   in his home town, and was also there for the celebration of religious services and issues of special concern such as Pro-Life activities.
When Kurt Krenn was appointed on 3 March as the Auxiliary Bishop of Vienna in 1987, he experienced much resistance from the very beginning in which he did not shrink from confrontation. Entrusted with the fields of art, culture and science, he ably made his views known in lectures, sermons and interviews. "For him it was all about the mission of the Church as the herald of truth for the people of all times, even our time," says Bishop Küng. "Especially engaged, he defended the right to life of every human being from the moment of conception to natural death, trying to use every opportunity to study the role of the family in the development of society and the importance rooted in human nature itself, to explain  established human sexuality and to identify the correct understanding of conscience, especially in its relation to God's Commandments. The discussions, which he engaged, however, were often fierce."
Bishop Krenn's work as diocesan bishop of St. Pölten was then - probably just because of those  previous discussions - "very difficult," says Küng. " Bishop Krenn did  not succeed in defusing the resulting polarization with time. This has unfortunately played a role in reinforcing that over the course of years.. That is why it is still not easy, to do justice to his person, his efforts and his role. Those who knew him well know that he has not suffered just a little from the situation, it also shouldn't be overlooked that in the resulting tensions many others suffered as well. "
Link to Katholisches...
Link to photo of Dietrich von HIldebrand, taken from Legacy Project...
Trans: Tancred vekron99@hotmail.com
AMGD
Posted by Tancred at 12:41 AM

That quote from Dietrich von Hildebrand is priceless! So very true. I am glad you also posted about Bishop Krenn....the holy ones absolutely will suffer; it can almost be a mark of their holiness when they do so well. I think now of Fr. Stefano Manelli and the Franciscans of the Immaculate whose 'crime' has been absolute faithfulness and love for holy mother Church. One day these sufferings will shine like a gem in the crown.