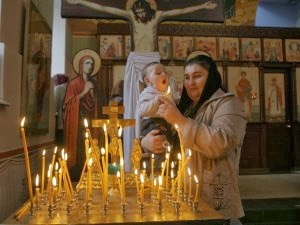 It also helps that they have strong leaders in the vein of their tradition in Patriarch Kirill and Metropolitan Hilarion, among others. If what seems to be more and more the current trend continues, see, e.g., the previous story on Teilhard, you may have to forward my mail to Moscow.

Amen! The future of real Christianity lies in Moscow...

And the total Russian population has probably increased exponentially, so the number of Christians per capita could have decreased.

Let those who write about the closure of the the monasteries of Thomas Aquinas, not throw stones about the purported factuality of the growth of Orthodoxy in Russia, especially after 70-plus years of jewish Communism.
- Fr. John+