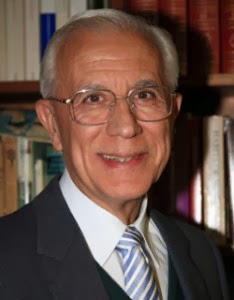 "The worst thing is that these statements are not new. They are repeated by the Jesuits for years without anyone contradicting. Quite a few  therefore think that this is the teaching of the Church," said de la Cigoña.
Info Catolica wrote: "As we write on the 2nd of January 2014, and Father Juan Masiá Clavel is still a Catholic priest and member of the Jesuit order."  In the Order and in Rome "it is  known exactly" what Father Masiá does and yet neither the Superior General Father Adolfo Nicolas, or a Roman Pontifical Council [Or even a pontifical commissioner] gets involved. It is time to clarify, so info Catolica whether Masia's position is the Catholic position. If not, then "clear countermeasures" would have to be taken.  "I support the criticism of Luis Fernando Perez Bustamante (Info Catolica) completely. I too have had it with Masiá. And Father Adolfo Nicolas and his inaction, " said de la Cigoña.
Father Juan Masiá is Professor of Ethics at the University of Sophia in Tokyo and a research associate of the Center for Peace of the Japanese section of the interfaith World Conference of Religions for Peace (WCRP) in Tokyo, also known as Religions for Peace (RfP).
Text: Giuseppe Nardi
image: La cigüeña de la torre
Trans: Tancred vekron99@hotmail.com
Link to Katholisches...
AMGD
Posted by Tancred at 3:30 AM

is there such a thing as a particular Jesuit?


apparently JPII, remarked when he meet a particular Jesuit one time - 'a Jesuit...and you're not a Marxist?'

I recall that in Malachi Martin's book by that name. It's about a priest from Nicaragua, I believe.

yep. the first la iglesia popular - an experiment that has had great success well beyond those borders as time has now told, since that book was published more than twenty years ago it's spooky now that the pope is from the anti-papal-party.

I bought 'jesuits' on kindle uk. say what they will about Malachi Martin, after he died of course, R.I.P, he was a prophet with an 'if these walls could talk', experience of the John xxiii experiment.

As long as you are in "full communion" with the pope (if this title hasn't been formally abolished yet, then you can do and think what you like, except of course, you cannot have traditional thoughts or actions. The Vatican is a complete mess and the church it leaves leaderless.

Interesting that he lives in Tokyo. Japan must have been one of the first countries to legalize abortion. It happened in 1949.

This Jesuit casuistry in favor of abortion has been going on for 50+ years.

To quote the Wall Street Journal :

"In some cases, church leaders actually started providing "cover" for Catholic pro-choice politicians who wanted to vote in favor of abortion rights. At a meeting at the Kennedy compound in Hyannisport, Mass., on a hot summer day in 1964, the Kennedy family and its advisers and allies were coached by leading theologians and Catholic college professors on how to accept and promote abortion with a "clear conscience."

The former Jesuit priest Albert Jonsen, emeritus professor of ethics at the University of Washington, recalls the meeting in his book "The Birth of Bioethics" (Oxford, 2003). He writes about how he joined with the Rev. Joseph Fuchs, a Catholic moral theologian; the Rev. Robert Drinan, then dean of Boston College Law School; and three academic theologians, the Revs. Giles Milhaven, Richard McCormick and Charles Curran, to enable the Kennedy family to redefine support for abortion.

Mr. Jonsen writes that the Hyannisport colloquium was influenced by the position of another Jesuit, the Rev. John Courtney Murray, a position that "distinguished between the moral aspects of an issue and the feasibility of enacting legislation about that issue." It was the consensus at the Hyannisport conclave that Catholic politicians "might tolerate legislation that would permit abortion under certain circumstances if political efforts to repress this moral error led to greater perils to social peace and order."

Father Milhaven later recalled the Hyannisport meeting during a 1984 breakfast briefing of Catholics for a Free Choice: "The theologians worked for a day and a half among ourselves at a nearby hotel. In the evening we answered questions from the Kennedys and the Shrivers. Though the theologians disagreed on many a point, they all concurred on certain basics . . . and that was that a Catholic politician could in good conscience vote in favor of abortion.""