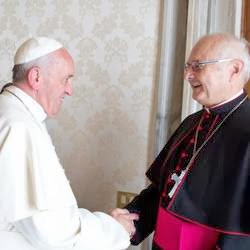 They are proposing to overcome the Doctrine of the Faith, which expresses a moral judgment on the sexual behavior of individuals. Sexuality is a private matter and its nobody's business, neither the Church nor God. It was time for a paradigm shift that is based on the fragility of marriage and personal experiences in the sexual area. The sexual morality is necessarily founded on "vulnerability", which should be recognized and supported.
Rome must finally realize that the hour has come to define marriage anew: "Marriage must profile itself as a sheltering vulnerable, not a necessary institution."  Marriage redefined by "palliative," "emancipatory" and "reflexive dimension" of the "vulnerability" of human sexuality.

The 20 signatories of the appeal given here are only a mouthpiece. Not that they would ask, no, were they faithful. A look at the professorial responses shows what they think about revolutionary "change". Of course, everything is demanded in the name of "more compassion".
"More compassion, and less punishment, which is roughly equivalent to what  the majority of the German bishops have written on their banners for some time," said Matteo Matzuzzi, the Vatican expert from Il Foglio .  Church teaching  only finds "acceptance" in theory, but is hardly practiced by the majority of believers. It should be obvious "that a Christian moral teaching on sexuality  will only be addressed  in the context of marriage, can't be stressed enough, when so many manifestations of sex are outside of marriage"   moral and pastoral theologians know to say.

Praise for "Hand Out" of the Archdiocese of Freiburg

The professorial document absorbed in a startling and comprehensive way what has been expressed in recent months by representatives of the German episcopate, especially the now retired Archbishop of Freiburg, who is still chairman of the German Bishops' Conference, Archbishop Robert Zollitsch. Accordingly the praise for the controversial "handout" of the Pastoral Office for Family of Zollitsch's Archdiocese of Freiburg is highlighted: "The most important  'pastoral' plan could be termed the 'Handout to accommodate people in separation, divorce and after civil remarriage' from the Archdiocese of Freiburg, which wants to make the philanthropic and respectful attitude of Jesus consistent to the measure of ecclesiastical concern for remarried divorcees. It took numerous impulses from the productive moral-theological discourse of the last two decades."
At the end of January, the Permanent Council of the Bishops' Conference will address the "handout" in preparation for the Spring General Assembly.  Several impatient German bishops urge to allow the divorced and remarried to the sacraments. They are attempting to touch up a growing chasm and prevent the breaking away of a large group. The Freiburg "handout" is to be officially recognized  for pastoral care without  officially changing doctrine, but probably to change the Church's practice [praxis].

The "handout" has already  been condemned by the Prefect of the Faith,Cardinal Gerhard Ludwig Müller, who described it as contrary to Catholic doctrine. Müller demanded from Rome to withdraw the document. But the German bishops do not want to give in. Cardinal Reinhard Marx, Archbishop of Munich-Freising Zollitsch jumped presently into the mix   with the weighty voice of the European Church. Marx is President of the European Bishops' Conferences COMECE and representative of Europe in the C8 Council of Pope Francis.
The applause at home  moves them more than the exhortations and warnings of Rome. The bishops are operating a high-risk gamble in the hope that Rome, in fear of a possible schism and the loss of the German wallet, gives in, or at least acts as if nothing had happened. The ideal case, is that in which the German church has operated successfully for decades. Rarely has such a harsh light shown on "German arrogance" as in the moment when Zollitsch and Marx stated publicly, that  the Prefect of the Congregation for the Doctrine of the Faith, which Benedict XVI. appointed and Pope Francis confirmed as supreme guardian of orthodoxy, has to change his mind, they say.

German bishops Did not Want Müller as  Cardinal

The smoldering underground conflict of latent schism in the German Church therefore became an open and violent collision. The Passau newspaper Neue Presse reported a few days ago that a group of German bishops had suggested to Pope Franzikus,  to remove Prefect Müller from the list of new cardinals.
An equally extraordinary and unprecedented action in the relationship between the German Church and the Vatican.The weekly newspaper Der Spiegel was trying to assist in their own way the episcopal concern by writing that prefect Müller   was "the most stubborn opponent" of the Pope, and published a negative opinion by Hans (Fog) Küng about him, and who of course designated him with a negative connotation, as "the new Ottaviani ".[Hardly, he's more of a "New Panzerkardinal"]

Pope Francis Can Not Meddle in Personnel Decisions

But Pope Francis was not impressed by the greed of some German bishops. Overall, the Catholic Church leader can not meddle in personnel decisions. Especially not to change decisions already made, as evidenced cases of a   very different bearing, such as the heavily criticized appointment of Msgr Ricca as domestic prelate of the Vatican Bank, or the  Monday clear-cutting in the Commission of Cardinals of the Vatican Bank. Only the new Cardinal Tauran, who is loyal to the Pope,  was confirmed.
In a Tornielli interview, Pope Francis addressed the pre-Christmas "handout" by Zollitsch and disagreed with the German design,  in any case he  he addressed the remarried divorcees position. In its content, however, the Pope did not respond to the question.
Since last Sunday, when the pope also named Archbishop Müller among the newly appointed cardinals, it was clear that for the German bishops, however, that their demand letter in which they wanted to thwart the appointment of Müller , was returned unopened to the sender,  and likewise Hans Küng's heckling went unheard. End of January, the bishops will have to decide whether it will be dissuaded by the papal signal from open confrontation?
Text: Giuseppe Nardi
Image: Il Foglio
Trans: Tancred vekron99@hotmail.com
Link to Katholisches...
AMGD

Germany has been causing problems every since Roma first conquered those Barbarians.

Why don't they just quit the Church those vile leaders? Or they should be excomunicated for such rebellion and non-Catholic thinking ...but I expect they will be tolerated by the Vatican ...as they don't question VAT II, teach orthodox morality, wear blue/grey habits, lead pentential lives and have a traditional "drift"....

Most of the hierarchy are no longer Catholic, anyway...it is patently clear

Through prayer and penance (which I'm not good at - but I'm trying - penance that is) I hope my faith is strong enough to resist the destruction in act of these bad men holding top ecclesiatical positions..

Everywhere we see these demands,there is clear Feminist influence.Put away the Feminist Bible,and use the Real One.

But anonymous the problem is that the Romans did NOT conquer the Germans as far as I remember. Hilaire Belloc explains that this is the reason for there being no decent cheese beyond the Rhine.

And only 20 moral and pastoral theologians in the whole of Germany and Austria? Dear me we could have served up as many heretics from one University college in the UK such as Heythrop at the drop of a hat.

It wasn't Roman legions but Roman religion that conquered the Hun.

Indeed, John Paul II backed off over his initial decision to make concessions to The SSPX when the German bishops threatened open schism. Were there not a few french bishops involved in that episcopal menace of liberal disobedience too?