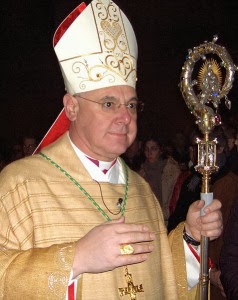 Archbishop Gerhard Ludwig Müller, soon to be a cardinal of the Catholic Church and Prefect of the Congregation of the Faith, announced on 22 December 2013 during an interview with the Italian daily Corriere della Sera, in which he claimed that it would a "sacramental de facto excommunication" continues for the SSPX  "due to their schism".
To this false claim, the Society of St. Pius X. clarifies its position:

This statement by Archbishop Müller is nothing new;  it repeats what he already said in October 2012, in the interview that he granted to the German radio network NDR:  “From a pastoral perspective, the door is still open,” while clarifying:  “No compromise is possible on the level of the Catholic faith, in particular as it was correctly formulated by the Second Vatican Council.  Vatican II is not in contradiction with the whole of the Church’s tradition;  strictly speaking it is opposed to certain erroneous interpretations of the Catholic faith.  We cannot negotiate the Catholic faith;  no compromise is possible.”  And he insisted:  “The Society of St Pius X knows the requirements that it must accept.  I think that from now on there will be no new discussions.”  Quite obviously, the Society of St Pius X denies no article of the Creed and professes the entire Catholic faith;  to call this into question is to make a false accusation.  It only opposes all the novelties which have been altering the Catholic faith for the last fifty years.

Very nice summary of quotes from high churchmen saying the SSPX is not in schism.

(I think you meant to write Card. Hoyos saying: "…without a papal mandate…")

As Muller has taught that even the heretic Lutherans are already members of the Church, how can he have any credibility when he claims that some of those who hold the full Catholic faith are in schism?

They are on the edge of a knife, are they not?

On the double-edged sword of truth ☺

As I was reading I was thinking, I wish Alan Aversa would comment on AB Muller's statements here and how in fact he represents the VaticanII Popes and the Magisterium. All of the doubletalk about cannot make compromises to the Faith and pastoral vs. doctrinal when in fact it is obvious that it's the other way around. Using knives and swords analogies haven't all of them double speaking fallen on their own petard? Doesn't that sum up the SSPX raison d'e tre?

The very existence of the Society is an embarrassment to the people who are in power now.

Thank you for this concise and clear summary...maybe you can meet with ArchBp. Mueller and explain it all to him v-e-r-y s-l-o-w-l-y, and remind him of #1792 of the Catechism:

"Ignorance of Christ and his Gospel, bad example given by others, enslavement to one's passions, assertion of a mistaken notion of autonomy of conscience, rejection of the Church's authority and her teaching, lack of conversion and of charity: these can be at the source of errors of judgment in moral conduct."

IMHO, the Archbishop is in violation of more than one point of the above section and really should do more research before making any statements on the SSPX to ensure he is in line with Church teaching.

This column takes lots of time doing very little; it equivocates, dodges, argues around, ultimately insists that SSPX isn't schismatic, but holds to the true Catholic faith.
Unfortunately, the Society lacks the appropriate authority to make such declarations. For all that I think the Society has done a great job of encouraging discussion regarding ambiguous portions of Vatican II, I'm forced to admit that the Society..cannot be construed as fully Catholic.

As much as I dislike saying it, it seems to me that such a situation can only lead to one conclusion: The Society's view can only be viewed properly as inherently schismatic, thus the Society inherently holds itself in a state of schism.
If the Society wishes to be reconciled, it'll need to accept Rome's direction.
Any other path..is inherently sinful and places the souls of the Society in grave moral danger.

Yes, they need the guidance of an Apostolic Commissar so they can get to abusing the Liturgy, promulgating heretical doctrine and promoting sodomy like the Jesuits do.

I think what we see here is the SSPX is guilty of the sin of "Tradition". This, of course, is more nasty than promotion of abortion, promotion of homosexuality, the promotion of worldliness. If Crd. Muller was really more concerned with the promotion of the salvation of souls, then there very clearly would be no question about schism as applied to the SSPX (it is apparent they are not in this light).
I do think all this is nonsense though as Card. Muller is just a guy, and not the Pope as the Germans have repeatedly pointed out. It is equally interesting that Card Muller agrees, as there have been no punishments for the Germans who have defied (and defiled) him repeatedly and regularly. It is almost like the Germans say to the world, "lets do the opposite of what Muller tells us to do, and what the Church teaches.... and that will show Muller (and everyone else) who is really in charge............ no one!

And he's embarrassed because he's 'lying'. Or is it just those 'listening' to him 'lie are embarrassed? He should be saying 'the faith has already been negotiated and can't be re-negotiated.' And instead of "Strictly" speaking it is opposed to some erroneous misinterpretations he should be saying ' the Church was wrong now it's right etc.' 'well, only about 'certain' things.' ...Peace, Tancred

I have a couple of questions about Vat II: 1) When Paul VI was asked about the AUTHORITY of the Council, did he not reply that it was only of a pastoral authority, (except when repeating defined doctrine from the past)? Doesn't that mean that if one brings up inherently ambiguous texts among some of it's writings THAT THOSE WHO POINT OUT APPARENT CONTRADICTIONS WITH THE PAST MORE AUTHORITATIVE DOCRINAL TEACHINGS than the pastoral documents of Vat II THE TRADITIONALISTS HAVE A RIGHT TO EXPECT AN EXPLANATION OF THE CATHOLIC WAY TO TAKE THE AMBIGUOUS PASTORAL NEW DOCUMENTS? E.g. take the controversy on grace and freewill between the Dominicans and the Jesuits in the 16th century. You can't accuse either of being heretics in their theological interpretations of things left undefined. But on the other hand, it can be shown that the new pastoral documents represent a development of insight on certain pastorally important issues which were untouched by previous authority: such as HOW TO TREAT OTHER CHRISTIANS AND NON-BELIEVERS,WHAT PRACTICAL ATTITUDE IS NEEDED TO REACH THEM, SO AS TO BE ABLE TO BE HEARD BY THEM, AS WELL AS ABSTAINING FROM SOCIAL FORCE BY RESPECTING THEIR PERSONHOOD AND FREEDOM TO REACH THE TRUTH.

And as for the Traditional Liturgy the well needed relooking and balancing of the immediate past of the Constitution on the Liturgy should not be a problem.BUT PAUL VI's actual RENDITION of the Constitution's recommendations was, well let's be honest EXTREME, SUDDEN, AND IMPOSED BY BUREAUCRACY. It also allowed TOO MANY OPTIONS which effectively made it possible to celebrate a Protestant way of worshipping and a more Catholic LOOKING worship service. IOW HIGHLY IMPRUDENT OF PAUL VI. It was to COUNTER THIS THAT LEFEBVRE CONSECRATED THOSE BISHOPS TO PREVENT THE LITURGY FROM LOSING THE THEOCENTRIC SPIRIT OF WORSHIP.
In the Council when Paul VI asserted that no one could criticize a pope's decisions, HE IMMEDIATELY GOT STRONG PUSH BACK FROM THE COUNCIL FATHERS. If they only did the SAME WITH THE N.O.RENDITION THAT POPE IMPOSED ON THE CHURCH. Now it is not of DIVINE ORIGIN that the pope appoint every Latin Church bishop. Thus there CAN BE a rare exception to the Church law. Paul VI is the one WHO STARTED THIS BY FORCING THE BISHOPS TO ACCEPT IT. It just so happened that most bishops DIDN'T CARE THAT MUCH ABOUT HOW TO GRADUALLY ADJUST EVERY SINGLE CHANGE WITH LITURGY and to EXPLAIN EXACT WHY. Now it could have been an imprudence of Lefebvre also to "jump the gun" so to speak in consecrating four bishops without Pope JPII permission. But something like this happen with the Photian schism when eventually Rome backtracked and allowed Photius to remain Patriarch for 20 yrs. In the present situation, there is certainly fault on both sides. Bishop Schneider of Asana has proposed that the Pope settle in a new syllabus which way to come down on ambiguous and/or novel expressions of the Council texts. In other words, does such and such mean this or that? Answer me!

Vatican II was not entirely infallible because it "ha evitato di pronunciare in modo straordinario dogmi dotati della nota di infallibilità [avoided pronouncing in an extraordinary way (newly defined) dogmas endowed with the note of infallibility]" (Pope Paul VI audience, 12 January 1966) and "In view of conciliar practice and the pastoral purpose of the present Council, this sacred Synod defines matters of faith or morals as binding on the Church only when the Synod itself openly declares so" (Council's General Secretary, 16 November 1964), which it never did for its doctrinal novelties.

Just because the SSPX refuses to submit to the Roman Pontiff and refuses communion with the members of the Church subject to him, how does this make them schismatic?

This blog asks that question of virtually all of the German speaking Bishops nearly every single day.

That is indeed the question Bertrand. Considering a significant number of bishops and presbyters no longer teach the Catholic Faith nor do they bring the correct intention with them to The NO Mass, it is they who are de facto schismatics. And there is the contradiction today with a liberal modernist church - it is in conflict with the Roman Catholic Church.


SSPX CONCEDES ERROR IN PUBLICATIONS : MUST POINT OUT THE VATICAN CURIA ERRORS ON VATICAN WEBSITES
The Society of St.Pius X (SSPX) concedes there are are factual errors in the books being sold by them.
http://eucharistandmission.blogspot.it/2014/02/sspx-concedes-errors-in-publications.html#links