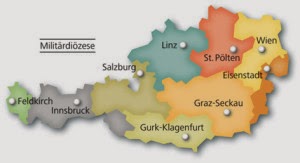 (Vienna) in Austria in 2013, there were more than leaving the church than in 2012. Nearly 55,000 Catholics have left the Catholic Church as a corporate body under public law. Thus more Austrians left the Church in the first year of the pontificate of Pope Francis, than in the last year of the pontificate of Pope Benedict XVI. The church leaders wonder about this phenomenon, which they had not expected.
"We would have expected better numbers," said the Bishop of Linz Vicar William Viehböck. Following the resignation of Pope Benedict XVI. there was  relief heard from not a few official church authorities in Austria. The reasons are to be sought in the different understanding of the Church. The election of Pope Francis was greeted with cheers. Since then everything will "different" and "better". But the harsh reality has caught up to the diocese now.

After the election of the new Pope a "a palpable mood swing" had occurred,  says Viehböck. The "mood" does not seem to be of the desired type. A "mood" seems to be no solid foundation for the Church. At the management level, one tries to maintain optimism and push the "Bergoglio effect" to the next year. Negative events would prove to act  even "faster" than positive, says Vicar Viehböck consolingly.
The increase in leaving the Church does not fit the image. It dampens the alleged "change of mood". By leaving the numbers regularly leaving the Church  seen driven by   progressive church policy   in recent years. The withdrawals were attributed to real and fictitious scandals or  the "conservatives" were blamed. Once the fault was because Bishop Kurt Krenn was appointed Bishop of Sankt Pölten, then the alleged "abuse scandal" of Vienna's Archbishop Cardinal Hans Hermann Gröer or because Pope Benedict XVI. wanted to appoint the "hardliner" Pastor Gerhard Maria Wagner as Auxiliary Bishop of Linz.

The new figures refute this transparent, but black and white image, thanks to support of the media. In recent years  leaving the church had been interpreted by "appointed" sides as an "outcry" against "the log jam" and "backwardness", yet there is currently a conspicuous silence. Church districts which are faithful have been demanding a fact-based analysis for years.  The individualization and dissolution of Church affiliation will be only be promoted rather than stopped by the progressive agenda with destruction of the liturgy, attenuated evangelization efforts and a staff that is no longer really Catholic, but speak in the name of the Church in public.
The increase in withdrawals is 4.8 percent. The percentage of Catholics in Austria's population has thus declined   to a record low. From a Church perspective an exit from the Church is not possible. Through a serious act that violates church doctrine and order, believers can suffer excommunication and therefore the exclusion from the ecclesial community. [Especially if they don't want to support the Liberal Tax-Church regime with its poorly managed healthcare facilities, liturgical abuses and shoddy catechesis.] This need not be explicitly imposed, but occurs automatically upon the act.
Text: Giuseppe Nardi
Image: Catholic Church in Austria
Trans: Tancred vekron99@hotmail.com
Link to Katholisches...
AMGD
Posted by Tancred at 12:56 AM

Since serious violation of Church doctrine causes the suffering of excommunication I would imagine the halls of the Vatican to be near devoid of members of the Church.

Well...duh! When you are a church and your solution to declining numbers is not to preach sound theology but to instead hire a large image consulting company what do you expect will happen?! Perhaps people do want a church which just makes them feel good and tells them what they want to hear, but I think deep down they want substance, they want to be challenged, they don't want this watered down Catholicism that we are currently being subjected to...Remember this all you current and future Cardinals the next time a conclave comes around!!

Things are certainly different with this new pope - he speaks so clearly that when he gaffes it's obvious. before this the previous post-conciliar popes were so philosophically phenomenological that many of their statements sounded so melifluous, nebulous or poetic that they could hide from most neo-catholics under a thin veneer of orthodoxy. Another difference is that Pope Francis does not care about tradition at all & this is clear too. Benedict XVI instrumentalised it for functional purposes. Of course, he was more measured with what he said in public.

They are about the same on trying to cover up as much as possible on sex abuse while I doubt much if things will really change at The Vatican Bank except names. Indeed, plus ca change..... The post-conciliar nightmare proceeds apace into its next paroxysmal phase under a pope who is orphaned from real Roman Catholic tradition by being completely illiterate in Latin. There is the most potent symbol of this papacy.

Surprise, surprise ... Why wouldn't they leave? They're being offered only reasons to do so.

Hi – It’s good to read such interesting stuff on the Internet as I have been able to discover here. I agree with much of what is written here and I’ll be coming back to this website again. Thanks again for posting such great reading material!! To get new information visit here
garden makeover
garden makeovers

Wow you people need to relax yes too much liberalism has infected the church. But have some hope and stop making up nonsense. How can you be excommunicated without it being imposed. It makes no sense.

I also personally like less latin because everyday people cam actually understand church language now. God is okay with it and so am I and it helps people out. If you dont like it go to one of those latin churches.

Do you people actually think God cares about the church langauge? Honestly do you people even know how strong the love and mercy Jesus is? plus that church has the authority to change something like language.

Stop being full of yourselves please you people dont know everything. I dont like the evil liberal crap but you traditionalists or antivatican 2 people need to relax and stop causing division within the church as well.

lol yes because everything in life revolves around latin. I dont recall jesus saying to the apostles if you dont know latin you will not enter heaven and are not my desicples. Langauges are earthly things we can change them as we like including in our churches!

Thanks for the off-topic hysterical ramblings.