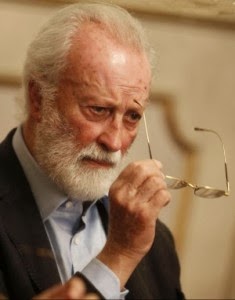 (Vatican) This time   the Press Office of the Holy See immediately answers Eugenio Scalfari's assertion that the Pope had abolished sin. Vatican spokesman Lombardi expressed here a critique of Scalfari that is actually more valid for the Pope.
Last Sunday, the atheist Eugenio Scalfari asserted in his weekly editorial, Pope Francis had sin abolished (see separate report "Pope Francis has Virtually Abolished Sin" - Scalfaris new Christianity, Which God Replaced by I  ). Up until now the Holy See  has held back from addressing  Scalfari.s comments about the unusual "dialogue" between him and the Pope, but this time there was a quick response. Vatican spokesman Father Federico Lombardi denounced Scalfari and his "obvious inaccuracies". "Pope Francis has not abolished sin," said Father Lombardi.
The Vatican stirred this time promptly while they were done last fall after the publication of a letter from the Pope to Scalfari and an interview of the Pope late and very restrained official statements about Scalfari. Vatican spokesman Lombardi told the press: "Scalfari is not so familiar with the biblical-theological."
"Certainly Scalfari's finding  in a long editorial, that the Pope had abolished the sin is not applicable. On the contrary, who really follows the Pope every day, knows how often he speaks of  sin, of our condition as sinners, and especially the message of mercy,"  it is only understood in connection with sin.

Last Sunday, Scalfari wrote that the abolition of sin by Pope Francis was contained in the Apostolic Letter Gaudium Gospel. A finding which was noticed in various media and has been criticized by several Vaticanists. "The fundamental spiritual dynamic, in which also the Pope asserts, is the consciousness of sins and asking for forgiveness for them,"  said Father Lombardi. But Scalfari is not quite familiar with the "biblical-theological field." The general aim was "to see the infinite greatness of God's mercy, and so engage us in this by the mercy and love of God through the experience of renewed Christian life. If someone eliminates the sin, one does not understand the message of mercy any more," says Vatican spokesman Lombardi.

The Press Office of the Holy See addressed  another glaring error in the  Scalfari's editorial statement: "Another obvious inaccuracy in this article is when Scalfari says that the Pope had canonized Saint Ignatius of Loyola a few days ago, Instead of, as we all know, Peter Faber, the first companion of St. Ignatius of Loyola, while Ignatius of Loyola has been a saint of the Church for several centuries. So I think that one must be careful to continue the dialogue, but   deepened so  that there is no confusion and it is really understood"
Scalfari  is not hurt by the denial.He is basking much more in his success,  that he had enterted into the ring with the previously unthinkable:  the option that a Pope allegedly said the conscience was the highest authority, without any restriction, and abolished sin.
Text: Giuseppe Nardi
image: Tempi
Trans Tancred Vekron99@hotmail.com
Link to Katholisches...
AMGD
Posted by Tancred at 3:44 PM