The Murderers of God Among Us -- Femen Activism on St. Peter's Square as "Christmas Message" 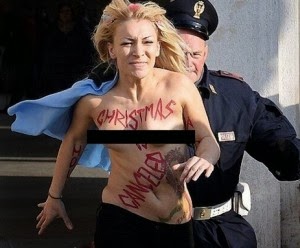 (Paris) The enemies of the Church have struck again. Inna Shevchenko, best known advocate of the church desecrating  Femen and the new national symbol of Hollande's Socialist France  (see Femen Activist as a New Symbol of France - Hollande Jacobin (homosexual) Ideology in German)  over St. Peter's Square on Thursday. Of course, "topless" and "for abortion." She did it in the usual Femen Church-hate way.  The figure of hate for  political activism was not only the Catholic Church this time. "Christmas is Cancelled" was scrawled on Shevchenko's torso, which Femen   used as a certain kind of advertising medium by painting the slogan "Christmas is Canceled".

On the same day Femen sent a "Christmas message" on its Twitter. "Christmas is canceled: At the Vatican, Inna Shevchenko has publicly expelled the embryo of Jesus from the Virgin Mary."  Christ ended on the cross because  the powerful people of his time could not endure Him. Femen would murder Christ today as they officially announce. The murderers of God among us.

Since Femen is servant of  some political activism  available for a fee, there is the question of who pays money for such a blasphemous and inhuman messenger. From the squalor of FEMEN-operatives and  Inna Shevchenko  there is only silence.
Shevchenko had become well known because she "participated"  with the political action group Pussy Riot, condemned by a court in Russian,  by sawing a large votive crucifix with a chainsaw  in Kiev. The Cross recalled the millions of victims of the Communist dictatorship.
Text: Giuseppe Nardi
images: L'Observatoire de la Christianophobia
Trans: Tancred vekron99@hotmail.com
Link to katholisches...
AMGD
Posted by Tancred at 10:51 AM

And I thought I looked bad naked. Dang!

It is these moments that make me want to join a new Crusade, in which these thugs and vandals are disciplined with pain.

Let the saints pray, and we will make way for them by being the scourge of God upon the blasphemer.

And if they say we oppose the witness of the Prince of Peace? The Prince of Peace was not a pacifist. Certainly, they will have to renounce the sainthood of people like John of Capistran, Louis the King, Jehanne the Maiden, Bernard of Clairvaux, Blessed Pope Gregory X, Blessed Charles the Good, and many more.

Where are those people willing to chastise those outraged by these blasphemers when smiling heretics preach friendship with people like Femen? There can be no compromise with the world: While God so loved the world that He gave unto us His Only Son, the World loved His Son that it killed Him, rather than rightfully glorify Him, to obey Him, do witness to Him, and to Die for Him as He first died for us.