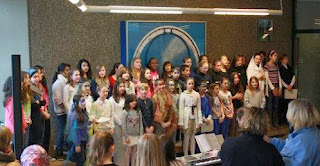 [Politically Correct] The abolition of best and most beautiful traditions  in Germany sometimes brings forth wondrous flowers. A high school [Gymnasium] in Stuttgart's Bad Cannstatt is celebrating  graduation on 20 December, a "Multicultural Celebration of the Feast of Values" rather than as a conventional Advent Mass. Ironically, the Catholic Church of Our Lady has even  made their church available for this ethical balderdash. Instead of the Mass of the  4th week of  Advent they committed to a celebration under the motto: "The 4th Thread, What Makes us Free?"  The organizer is the Ecumenical Student Council of Religion and Ethics.
According to the invitation letter from the Gottlieb-Daimler school to the parents, which was forwarded to PI, it reads (to enlarge click on the picture, with a brief summary below) :

So it is logically quite enthusiastically against racism and boasted that the almighty Cem Özdemir himself has awarded them the anti-racism plaque: "School without Racism--School with Courage". In general, the school represents itself as very liberal, whether they were to make  a silly short film, a Ju-Jutsu course or a learning tour of Stuttgart against racism. Such invaluable curriculum enrichments, without which the future intellectual elites of our country would not be socially acceptable and certainly not politically correct, are safely inculcated.
We ask ourselves, where is the much sought courage to keep one's own Christian traditions. Why does   no one have the courage to openly confess to rather than replacing Christian tradition by any favored ethical system? Why must everything be mixed in an ideal world mess, instead of showing some integrity?
Contact:

There was also a report taken up by Junge Freiheit with some more back ground on this event:

It was an ecumenical festival celebrated to the assembled students on the last school day before Christmas under the motto: "The Four Thread -- What Makes us Free?".

For this event students of Evangelical and Catholic religious instruction groups as well as the ethics class were called upon the make contributions, explained a letter of explanation by the school, which is published above by Politically Incorrect.   The result of these considerations was that the students were desired to present a multicultural religious service in the Catholic church.

The event was organized by members of the Ecumenical Department of Religion and Ethics at the school "where people from 20 different nations come to learn",  it says on the school's internet site.  "We accept no form of racism, antagonism to women or other discrimination.  We are attentive to appropriate speech."  It is unclear why the school had replaced a Christmas Mass with a "Multi-cultural Feast".  The administration has not made a statement available. (FA)
Translation: Tancred vekron99@hotmail.com
Link to Politically Correct in German....