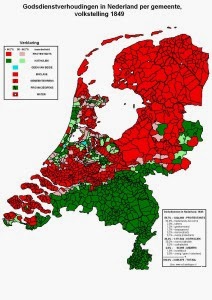 
Turmoil on the Progressive Fringe: Last Offer to Force a Decision

The turmoil in the progressive church fringe seems to have directly to do with the new pontificate. With the resignation of Benedict XVI. modernist circles, at least in Rome that concerns the level of the universal Church. At the level of the local churches, there was more room to maneuver, it could be seen through networking in the diocesan leadership, with the media and "dedicated Catholics". Not least, because of the timorous opposition of the bishops. With Pope Francis, whether rightly or wrongly, the “disobedient” sense they are on the rise. Those who according to their own definition are "responsible" Catholics. It is becoming apparent that they want to go for broke. These increases over the public pressure on the bishops and Rome. A strategy is also recognizable: it is about to achieve a success in at least one question of the progressive demand catalog. It would mean that the struggle for the church is not yet decided. And he would be seen as a start signal and incidence door for a kind of "hostile takeover" of the Church. More successes would then only a matter of time.

In fact, there seem to have the modernists hurry. Your leaders are getting on in years, 1968 is already far behind. The unexpected resignation of Benedict XVI. shuffled the cards unexpectedly new. One success, they are by no means certain. Anyone who follows the publications on the edge modernist church, though found enthusiasm for Pope Francis, but seems rather attached. Between the lines is still considerable distance to papal Rome to hear, but also uncertainty about what this Argentine Pope really wants. An embarrassment that they share quite with other Catholics. You can not claim with certainty to be the Pope. The fact that the question of his assignment seems undecided, they feel compared to the previous pontificate of the incorruptible and theologically superior Benedict XVI. already as a relief and twist to their own favor.

The progressive groups appear, therefore, decided to take advantage of this no longer considered possible opportunity and want to force a decision in their minds. The output of this "last offer" will decide whether the Catholic Church has delayed, or will go down the "irreversible" path of democratic Protestantization with all signs of dissolution, or whether they can once again raise, by God's grace, to a Catholic renewal as that of the Counter-Reformation.

Ad Limina Visit of the Dutch Bishops in Rome

In the Netherlands, the already-dead modernists are fulminating to new virulence and have directed a "manifesto" to Pope Francis. The occasion is taking place yesterday, the Monday ad limina visit of the Dutch bishops in Rome. The bishops were received yesterday morning by Pope Francis. The audience was originally planned for the 5th in December, but was then brought forward. This week also the C8 Kardinalsrat will meet for the second time and deal with the reform of the Roman Curia. The Pope let them know that because of this reform of the Curia it was not a time for individual meetings with the Dutch bishops.

Through the media and its "Manifesto" Holland's modernist fringe also wants to make itself felt. And in Rome. That edge is largely responsible for the decay of the Dutch Church, which was strong until the early 60's. The Netherlands is now the EU's most de-Christianized country. The majority of the population describes itself as non-religious.

Two progressive groups, the Association Utrecht Bezield (BVU), with about 4,000 members, and the organization Professor Manifesto of about 60 academics, have joined two weeks ago and submitted a joint "manifesto". The merger would be comparable to that of a coalition of We Are Church and the Pastor-Initiative. In the Netherlands, they are in both cases, lay initiatives. The corresponding links of both groups to We are Church and Pastor-Initiative speak for themselves.

The "engaged" laymen show themselves to be "concerned" about the situation of the Church in the Netherlands. Indeed, there is reason to be so. The local Church is suffered for decades from progressive disorder and in consequence, an increasing decay. Alarmingly. the "Manifesto" would thus completely overhaul the parish landscape of the Netherlands by reorganization plans of the bishops. In fact, there are such plans, which should lead to the abandonment and merger of 1,300 parishes. The fate of thousands of church buildings is uncertain. It is necessary to make plans for the shortage of priests and the deficiency of the faithful. The consequence is the destruction of the resultant past centuries capillary network of historic parishes. A negative development, which triggers restlessness, pain and disorientation. The bishops put on a new organization of the parishes with the ultimate goal that every parish in the future is headed by a priest. Several neighboring parishes are to be merged into "Eucharistic centers", which are called "places of hope."

Modernists for a Priest-less future

The modernists, otherwise spokesman of progress, present themselves in the "manifesto" to the Pope as a defender of tradition, specifically the historic parishes against the "mega-parishes". In lengthy sociological and psychological explanations, they argue for its retention. "The culture, the cultural richness and heritage are in danger of being lost forever," it says in on the progressive side of an unfamiliar word choice under the heading "Manifesto". In this case, the two groups also oppose the sale of church property and rightly, especially of churches.

However, the objective pursued here is the priest-less parish. The retention of the old parish landscape would necessarily result in the establishment of lay people as parish pastors and a head-less "church" and thus to a fundamental restructuring of the Church and a further decomposition of catholicity. In the "manifesto" to the Pope, therefore, they are accusing "episcopal politics" of an "authoritarian" approach toward the "mature" Christians and "a 'coming into a mature identity'" of the laity's voice: "The episcopal policy is implemented in an authoritarian manner and the faithful are not adequately included in the considerations and the standards of transparency, accountability and democracy are violated. This approach in no way proves that one is aware of the social and religious responsibility of God's people, let alone respect for them. In addition, every human measure is disregarded. The episcopal leadership does not seem to be aware that the majority is the result of an identity which comes to maturity, the individual and community prevail." A new "identity", which requires no more priests. This, however, the initiators have not openly included for the Pope in the "Manifesto".

For the "Manifesto" they refer to the new Apostolic Exhortation Evangelii Gaudium. How these and other messages indicate, allow some undefined terms in the Exhortation, an apparently rambling proposal. First there's the expression of wanting to support Pope Francis.

The "Manifesto" is correct in the impression that the Church in the Netherlands is located in a historically unprecedented dissolution that the dissolution of parishes, closings, profanations, the reclassification or cancellation of churches, make the decay of Christianity obvious. It is true that it is a development that hurts faithful Catholics deeply.

However, the progressive analysis as already mentioned previously uses the wrong position. One searches in vain for a touch of self-criticism, of repentance for its responsibility for the devastation searches in the document. What is deplored in the "Manifesto", are but the same modernist currents, for which the carriers of the new "Manifesto" are now largely responsible. To listen to them, would be to make asking for trouble.

Does anyone else feel like it's about to "hit the fan"?

I predict a Humanae Vitae.

A HV moment, where he disappoints all these people like Paul VI did and got viciously attacked.