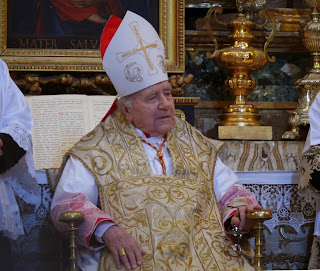 (Vatican) The Church musician Domenico Cardinal Bartoluccci is dead, who was born near Florence in 1917, the Cardinal was  head of the choir of the Sistine Chapel  from 1956 to 1997. For decades, he forged the Church music at the papal liturgies. In 2009, he gave a well receivedd interview about the liturgy. Cardinal Bartolucci was one of the priests of the Catholic Church, despite the liturgical reform of 1969/1970, who still celebrated in the Old Rite and it steadfastly clung to it till the end of his life. In 2010 Pope Benedict XVI elevated him to cardinal.
At 14, he composed his first motets, oratorios and cantatas, was organist of the church of Santa Maria del Fiore in Florence, and was ordained a priest in 1939 by Cardinal Elia Dalla Costa. After a period as Director of Music in Florence, church music studies in Rome and in the pastoral care of a parish priest in his home diocese Montefoscoli, his calling was to Rome. Bartolucci was first deputy choirmaster at the Basilica of St. John Lateran, from 1947, he was  choirmaster at the Basilica of Santa Maria Maggiore and from 1952 deputy director of the Sistine Chapel Choir at St. Peter's Basilica.  In 1956 Pope Pius XII appointed him, finally, as the choir director of the famous choir that sings in the celebrations of the Pope.

Keeper of the Church Musical Heritage of the West

The priest, composer, choir conductor and orchestra director is one of the most famous musicians of the 20th  Century Church. For his personal merits Pope Benedict XVI elevated him. on 20 November 2010, to the rank of Cardinal.The award for Domenico Bartolucci was a precise signal by Benedict XVI. as part of his efforts to restore the consciousness of the sacredness of the liturgy. The Church Music is a not insignificant part of it. Besides the maintenance of Gregorian chant, Bartolucci was mainly a custodian of the church musical work of Giovanni Pierluigi da Palestrina. In general, he saw his role as the preservation and maintenance of the large church musical heritage of the West.
On the occasion of his 85th Birthday, Paul Cardinal Poupard, then President of the Pontifical Council for Culture said: "Maestro Bartolucci has succeeded as a real Christian artist, making perceptible the Gospel of the risen Christ with his music and his work as a choirmaster in an engaging and fascinating way the world of spirit, and the message of the Christian faith. "

Cardinal Bartolucci Celebrated Only in the Old Rite in His LIfe

His personal attitude played a role in the '90s and led to his dismissal as head of the Sistine Chapel Choir. A decision that was frowned upon by the then Prefect of the Congregation, Cardinal Joseph Ratzinger. As Pope, he was  demonstratively responsible for the rehabilitation Bartoluccis, especially with the 2010 survey in the cardinal's rank. The appointment of a cardinal priest, who personally rejected the liturgical reform, ensured some discontent in Church circles, which was mitigated by the fact that Monsignor Bartolucci was already 93 years old and no longer entitled to elect a pope.
In 2009 Domenico Bartolucci, then not cardinal, gave an interview which received international attention. On the occasion of his death, we would like to call this interview in remembrance and recommend to read: "What do we do with liturgists who do not know the theology?" - Interview with Msgr Domenico Bartolucci the em. Choirmaster of the Sistine Chapel .
Text: Giuseppe Nardi
Image: 30Giorni
Posted by Tancred at 12:56 PM