French Carmel Returns to the Immemorial Rite of All Ages 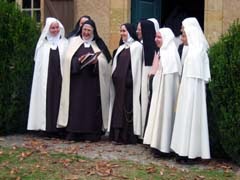 (Paris) The Carmel of the Sacred Hearts of Jesus and the Immaculate Conception in Alençon returned to the Immemorial Rite of the Catholic Church.

Already in 2008 the Carmelites made the first step in the direction of traditional liturgy. "We prefer the Extraordinary Form of the Roman Rite" which the newspaper La Nef reported in 2010 on the religious. The Holy Mass on Sundays and public holidays has therefore celebrated in the traditional form of the Roman Rite for several years. The Holy Mass on weekdays initially remained the ordinary form. Now Bishop Jacques Habert Sées has allowed the complete return to the Immemorial Rite. The Holy Mass will be celebrated in the Old Rite on Sundays and holidays at 9 clock and on all working days at 8 clock in the Carmel. The Chaplain of the monastery is a diocesan priest, assisted by priests of the Fraternity of St. Peter.

The Carmel was founded in 1988 at the request of Bishop François-Marie Tregaro Sées. A first Carmel had already existed in Alençon 1780-1792. It was abolished during the French Revolution, however, which is why the bishop has sought re-foundation. When Pope Benedict XVI. issued the Motu Proprio Summorum Pontiicum in 2007, the sisters were soon agreed to return to the Old Rite. The nuns devote six to seven hours a day in choral prayer.

If anyone could do it, the Carmelites can. They have always had a spot in my heart even after leaving the Vatican II cult, and their spirituality is deep and profound. May God bless this effort, and may this reverse the evil of the days of the Revolution, immortalized in Francis Poulenc's opera. - Fr. John+