Did Pope Francis Condemn the Catholic Protest Against a Syncretistic "Memorial Liturgy" in Buenos Aires? A Riddle. 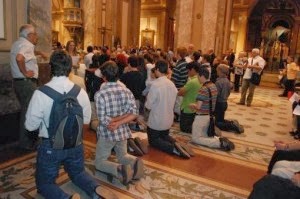 (Rome / Buenos Aires ) there is currently quite a mystery to an alleged condemnation. Pope Francis is supposed to have  "condemned the interference in a memorial service in Buenos Aires commemorating the 1938 November Pogrom" to a representative of the World Jewish Congress (WJC) which the Catholic press agency reported in German-speaking countries, citing the World Jewish Congress. Young Catholics protested on 12 November in Buenos Aires with a statement against the profanation of the cathedral by a syncretistic Jewish-interfaith "memorial liturgy" (see separate report Young Catholics protest against "misuse" of the Cathedral of Buenos Aires to Jewish "commemorative liturgy" ). On the part of the Vatican, however, there is not even any confirmation of these declarations, even an acknowledgment of the audience.

According to the World Jewish Congress on Tuesday Pope Francis received Claudio Epelman from the Latin American Jewish Congress (LAJC).  Epelman was participating at a meeting of the International Centre for Interreligious and Intercultural Dialogue King Abdullah Bin Abdulaziz (KAICIID) on Monday and Tuesday in Vienna.

According to the World Jewish Congress, the Pope told to Epelman: "aggression can not be an act of faith." A statement that the WJC placed on its website described the "vociferous protest," meaning the Rosary in Buenos Aires. In addition, the WJC said the Pope affirmed that Christians "must not preach intolerance" and such "militancy must be overcome." The World Jewish Congress reaffirmed its opinion that the "followers of the SSPX" had acted to "disturb" the memorial.

Claudio Epelman, has been "friends" with Bergoglio since his time as Archbishop of Buenos Aires, and praised the clear words of the Pope in the past condemned anti-Semitism, says the WJC.

So far the description only comes from the World Jewish Congress on its website. The message was only accepted in the Catholic area of the Catholic media in the German language, as well as of the German editors of Vatican Radio. Other editors of Vatican Radio have not accepted the message, neither the Italian or Spanish-speaking Catholic media. Also Pagina Catolica, which had called the protest against the Jewish-interfaith "worship", yet knows nothing of a statement of the Pope regarding the incident in the cathedral.

On the official website of the Vatican there is no indication of an audience. Epelman is neither included in the audience list, nor is there from any confirmation that the Holy See had an audience and even less of a statement about the contents. According to the Vatican, Epelman was received by Pope Francis, along with other religious leaders shortly after the conclave on 20 March as a member of the delegation of the World Jewish Congress on 2 September ( see separate report ).

The incident made clear that in addition to political and religious complexes within the Catholic Church there seems to be some confusion. Likewise, that between religions, despite the officially maintained dialogue, there is little mutual understanding. Amazingly, the Jewish side, where at least a certain astonishment would be expected on why a Jewish commemoration with a "worship" takes place in of all things in a Catholic context, must immediately assume anti-Semitism, while the young Catholics are not concerned with a Jewish, but a Catholic question. It was not about the non-Catholic "guests" who came to the cathedral, but the Catholic Archbishop, who presented the cathedral for a non-Catholic event. The young Catholics had previously asked the Archbishop unsuccessfully in writing and with a public appeal, to not open the church for a non-Catholic "liturgy". The incident reveals a lack of willingness to dialogue by the Archbishop of Buenos Aires, facing the faithful. He also demonstrated unwillingness to address the Catholic and non-Catholic participants of the "memorial service" to acknowledge the written statement distributed to the attention of young Catholics. The "memory" of 12 November also raises the question of whether the officially maintained upper-level inter-religious dialogue is on the right track in the details. Even so it is astonishing, is the reflex with which the German-speaking Catholic media immediately adopted the ultimately anti-Catholic message of the World Jewish Congress. A reflex that perhaps would require an inquiry.

Maybe tomorrow you can learn from the mouth of Vatican spokesman Father Federico Lombardi more about the alleged statements by Pope Francis' Claudio Epelman, if an audience had ever taken place.

I was going to check the ADL to see what Mr. Foxmann had to say, but forgot so I guess I will. Interlopers. This Buenos Aires event is now obligatory it seems, like Popes at the Ultimate Jewish religious Symbol. I have visions of vengeance and visions of resentment of vengeance that is falsely owned.

The SSPX should go on a full-court press against Archbishop Peli a la St. Athanasius using Alinskyite tactics calling him to repentance for his profanation of Catholic worship spaces and marginalizing him as unfit to lead the faithful in Argentina if he refuses to stop this abomination of desolation. This should include the best-looking and youngest catholics picketing his residence and demanding that he explain exactly how these ceremonies abide with Catholic teaching. If he tries to justify his actions using PC-based progressive pablum he should be mocked for trying to act as a representative of the Frankfurt school of cultural marxism instead of acting as a Catholic prelate.

"The SSPX should go on a full-court press..."

Or, alternately, they could do something that isn't ultimately suicidal and wouldn't be perceived by the entire non-traditional-Catholic world as hateful and anti-Semitic.

However, given the situation, I figure they'll continue to do things that are going to turn this Pope so thoroughly against them that he will do something rash (but official).

You know, the Houston Cathedral got rented out for a protestant ordination recently. Anybody could go protest that, without risking being associated with anti-semitism...but I notice no one is.

Maybe the SSPX could go on a full-court press against DiNardo. That sounds safer.

But, like I said, I know they won't do the smart thing...

It's suicidal because you say so? I guess from the pusillanimous point of view of the social scientist, it would be. The Society has been growing while the institutional church and it's compromises is dying. Just who is suicidal now?

@Harry Seldon: "Non-traditional-catholic" is an oxymoron. If you knew anything about Catholicism you would know that - anything not of tradition isn't of the Church. Like, the claim that we are supposed to abide by these new disciplines because they reflect a "new", "deeper" understanding of the Catholic Church in relation to non-catholic sects. No, I reject that as heresy. We are obliged to hold dogmatic teachings and their resulting disciplines as they were once stated by the Church and not adopt innovative understandings of dogma and the resulting false and blasphemous disciplines in view of, e.g., a deeper understanding of man, or of the world. or of God's revelation. Or do you place yourself outside of this obligation?

Trying to be beloved of the enemies of the Church will not do the Church any good - quite the opposite.

The Houston Cathedral business is yes another scandal and yes nobody does anything about it and further in Texas protestants in millions are Zio-Christians. It is a hot-bed of this particular heretical "theology". This Creeping Con is particularly offensive and particularly dangerous to the Church and Catholic soul.

So shut up, SSPX, unless it's a politically correct target!

Actually Bishop Lynch in the Diocese of St Pete has allowed the protestants (Episcopalians?) to have their ceremony in the Cathedral as well. At least Houston got some money (sarcasm).

I was getting ready to type very much the same thing. Well put.

This is all so ridiculous. The term Church, the reference to the Catholic Church and the term Tradition have been completely used in a manner for hate, argument and discourse divorced from Jesus. You argue, you fight and you hate for naught. What Jesus did, said and commanded us has become completely irrelevant to what is Truth.

Has anyone gotten to the bottom of this yet? It is being used to instill more hatred and animosity towards traditionals in general and the SSPX in particular. In fact, it is beginning to scare me what I am reading.

Christ established His Holy Church in Heaven, Purgatory and here. We are the Church Militant who strive to get to be part of the Church Triumphant in union with God, Father, Son and Holy Spirit.

You want to be impressed with all this pro Jewish propaganda?
Look at real history, during the dicatorship. The pope as Bergoglio is well recored for his support of the dictatorship of the day. It was only when democracy was installed in 1983 the church to became the worm it was an turned, being financially supported by the dictatorship given to even appointing the bishops of which Bergoglio was one. Catholic's weren't exempt from the attrocities well recorded by Emilllio Mignone, a devote one himself, losing his own daughter, among thousands of others and becoming the driving force as human rights advocate, well recorded too.
After surviving the Holocaust, once again the Jewish community became victims of an ideology this time at the hands of a ruling junta made up of Catholics, including clergy and prelates, subjected to nothing less than the horrors of the present day terrorist's, further humiliated those who survivied, placed in rooms decorated with the Nazi insignia.
Emillio Mignone was the one held high in the esteem of the Jews, and the need to make amends for the role in the church played, Pope John Paul, the astute politician that he was, knew very well what he was doing when making Jorje Bergoglio an equally astute politician, a favoured son a Cardinal coming up now smelling of roses with Videla dead who pointed the finger at the church, and Emillio Mignone gone to hisds grave, with only his written word left for those who seek to know the truth.