Why Canonize a Pope Whose Teaching Office You Contradict? 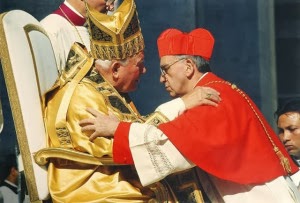 (Rome) Recently the Catholic art and cultural critic Francesco Colafemmina posed a provocative question recently in response to Pope Francis' interview with atheist Eugenio Scalfari. This refers to the canonization of Pope John Paul II by Pope Francis. Colafemmina refers to the encyclical Veritas Splendor, which John Paul II published on the 6th of August in 1993 in the fifteenth year of his pontificate. The cultural critic sees in the statements of Pope Francis on conscience an open contradiction to the previous church teaching.

Excerpt from the Encyclical Veritatis Spendor of John Paul II in 1993 on the Conscience:

32. Certain currents of modern thought have gone so far as to "exalt freedom to such an extent that it becomes an absolute, which would then be the source of values". This is the direction taken by doctrines which have lost the sense of the transcendent which are explicitly atheist. The individual conscience is accorded the status of a supreme tribunal of moral judgment which hands down categorical and infallible decisions about good and evil. To the affirmation that one has a duty to follow one's conscience is unduly added the affirmation that one's moral judgment is true merely by the fact that it has its origin in the conscience. But in this way the inescapable claims of truth disappear, yielding their place to a criterion of sincerity, authenticity and "being at peace with oneself", so much so that some have come to adopt a radically subjectivistic conception of moral judgment.

As is immediately evident, "the crisis of truth" is not unconnected with this development. Once the idea of a universal truth about the good, knowable by human reason, is lost, inevitably the notion of conscience also changes. Conscience is no longer considered in its primordial reality as an act of a person's intelligence, the function of which is to apply the universal knowledge of the good in a specific situation and thus to express a judgment about the right conduct to be chosen here and now. Instead, there is a tendency to grant to the individual conscience the prerogative of independently determining the criteria of good and evil and then acting accordingly. Such an outlook is quite congenial to an individualist ethic, wherein each individual is faced with his own truth, different from the truth of others. Taken to its extreme consequences, this individualism leads to a denial of the very idea of human nature.

These different notions are at the origin of currents of thought which posit a radical opposition between moral law and conscience, and between nature and freedom.

Celebrating the canonisation from a traditionalist perspective