Commemoration Mass for Pope Pius XII in St. Peter's -- When Will the Canonization Process Proceed? 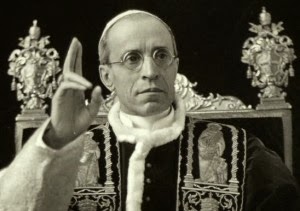 (Vatican) On the 12th of October Maria Jose Cardinal Saraiva will celebrate Holy Mass in memory of Pope Pius XII. Holy in St. Peter's Basilica. Four years ago, Pope Benedict XVI elevated him to the Venerable Servant of God. When will the beatification process continue? The Church also has a question of political developments, such as the miracleless canonization of Pope John XXIII Council. points to the timely commemoration of 50 years of the Second Vatican Council.

On the 9th of October 1958, he died 55 years ago, the last Preconciliar Pope, as the Pastor Angelicus was called. On the 18th of October in 1967, nine years after his death and the death of his successor in the Chair of Peter, Pope John XXIII., the process of beatification and canonization of Pius XII was opened at the diocesan level.

On the 19th of December 2009, the second phase of the process involved numerous delays and political interventions reached its conclusion with the elevation of the deceased to the rank of Venerable Servant of God. Pope Benedict XVI., who wanted to advance the beatification, but then ordered a re-examination of the entire archived material under Jewish pressure, signed a decree in the fifth year of his pontificate, which recognized Pope Pius XII's heroic virtues.

The method has been overshadowed since the 60s by artificially nourished doubts about the alleged "silence" of the Pope against the Nazi persecution of the Jews. "Criticism, which was vociferously supported by an equally progressive, hypocritical faction within the Catholic Church," said Messa in Latino.

Hochhuth's silence about the background to the idea of ​​"The Deputy"

The starting point of a defamation campaign against Pius XII. was first performed in the 1963 play The Deputy by Rolf Hochhuth. Because of persistent silence, Hochhuth is still unclear how exactly he came to his theses. The assertion that the Pope was standing by watching the Nazi extermination of the Jews, comes from the propaganda of the Soviet Intelligence Service and came from the Soviet controlled East German Republic to the Federal Republic of Germany. What connection is there between the starting point of Hochhuth and Moscow, however, has not yet been clarified. The play, translated into several languages, has created the image of the late Pope influenced lasting until today.

The systematic scientific study of the pontificate of Pius XII. has refuted the accusation. Instead, it brought a new set of documents to light of the personal intervention of the Pope to the rescue of Jews. The Israeli historian Gary Krupp came to the conclusion that Pius XII. during the Second World War "did everything in his power to protect and defend the Jews." According to Krupp's archival research, Pius XII. saved more Jews than all the leaders of the world. "And this from a city under siege, and not from a comfortable chair in London or Washington." wrote Krupp, who has compiled 76,000 pages of original documents in support of his thesis.

Contribution of historians to relax in relation to Israel Pius XII.

The relationship between Israel and the figure of Pius XII. has now eased considerably. Not least was this helped by Benedict XVI. with the order for an investigation. On the German side, Hochhuts publicity legend for a "silent" Pope in the face of mass murder is contradicted especially by Michael Hesemann. According to Hesemann the Pope alone rescued more than 11,000 Jews in Rome during the life of the war. Among them was the former Chief Rabbi of Rome, Eugenio Zolli (born in Israel as Anton Zoller), who had himself baptized after the war and was received into the Catholic Church. Hesemann relies on some of it in the archives of the documents of the German national church in Rome.

Also, the Holocaust memorial Yad Vashem in Israel changed the caption for Pius XII., a first step towards rehabilitation of the Pope to the Jewish people. When the beatification process will be resumed, however, is unclear. The question is the subject of a fierce struggle between various currents within the Church. Church policy issues may have a significant influence on the beatification and canonization process sometimes. The canonization of Pope Pius IX., the Syllabus Pope, became possible when John Paul II in the Holy Year 2000, also beatified Pope John XXIII.

The canonization of John XXIII. without the recognized second miracle opened a vulnerable flank for the Church, which at the present, however, does not matter because of the role media popularity plays for Pope Francis.

Email ThisBlogThis!Share to TwitterShare to FacebookShare to Pinterest
Labels: Pius XII, The Deputy, the Jews

Are any of these popes the caliber of Pope St. Pius X?

Isn't October 12th, 2013 the day the Pope consecrates the world to Mary ? Why would there be a Mass in commemoration of Pope Pius XII the same day ?