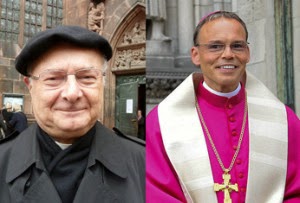 In earlier times, the Turkish sultans sent to high-ranking personalities who were sentenced to death, a silk thread - stylishly usually in a small jewelry box. After receiving, the condemned was strangled by a servant or soldier. This method offered the very great advantage that the sultans could vacate brothers and nephews out of the way to secure their rule, without shedding their royal blood. Occasionally, even the convicted had the opportunity to escape the strangling by suicide. If the blood flowed, this was thus the responsibility of the individuals affected.

The practice is to get rid of unwelcome people by murder or solicitation to commit suicide, has been significantly refined in our society today, especially in the post-Conciliar, 'Love Church', which looks back with particular horror at the terrifying practices of the pre-Conciliar, 'Power Church'. With witch hunts, the Inquisition and poison murders à la Borgia, they want to have nothing more to do. Yes, we have exploited even these downright atrocities to justify the enforcement of a completely new Church image. Gross misinterpretation and exaggeration of the historical facts are thereby considered acceptable. Finally, it's for a good cause.

That the end justifies the means, especially when it comes to the noble goal of their own assurance of domination, not only numerous bishops, but also understood by the employees in the Chancery, the functionaries of the ZdK [German Bishops' Central Committee], the parish councils and many other "engaged" Catholics. Their victims are mostly faithful priests and pastors, as well as followers of the Traditional Rite. The 'progressive' average Catholic keeps his distance from such people, because in secular society it would be considered reasonable and enlightened and therefore to be ashamed of an authentically lived and practiced faith (which he himself lacks of religious education usually no longer recognized or understood). The functionaries and higher officials in turn fear the criticism of the media - and thus the scolding of the media-political class of hearing. One would like to continue to stand in the middle of society, that is: the socio-political establishment belonging - as once the Jerusalem Temple aristocracy.

Nothing would be as unbearable for the majority of the German episcopate, as at a reception in the Chancellery to address an intercession of Jews about the Old Mass, the extravagance of a brother's Office or the backward views of the Pope. Because the sectarian mood can pass quickly. Quickly and could result in a conflagration. Several years ago, in the case Mixa, it went up quickly to 40,000 euros, in a Piranesi engraving which had been (mis)invested. In the causa Tebartz van Elst one takes offense at what is already 30 million for a diocesan center with a two and a half bedroom apartment, which has been successfully re-interpreted by the media to swank episcopal residence. What's next? The many millions, spent by former Archbishop Robert Zollitsch, which in his case was sunk into the completely ridiculous and self-centered redesign of his cathedral - which made Freiburgers so angry, because the funds for the renovation of the cathedral tower are missing? The nearly 20 million, by Cardinal Marx, for the purchase and renovation of his second residence in Rome has been let off free? The 40 million which Gebhard Fürst spent on a diocesan center in Rottenburg - a building that exudes the charm of an oversized District Savings Bank in contrast to the highly successful architectural Limburg Vicarage? And how it looks once the millions to be addressed, the outputs of the German bodies Catholicism for a totally bloated government - or for institutions such as the LCY, the aim now only is to undermine the Church from within and to destroy all which has been built up in this country over generations and half a millennium? There is no fear that you will be expelled from the cosiness of the German church tax haven in the end? What a horrible idea if future bishops must prepare their meals from fungi, which they themselves have collected in the forest! However, not seeing as how Bishop Jaschke flirts on a talk show about humility, but to be truly satisfied? If the German clergy his modesty can not demonstrate through the expensive transformation of sanctuaries and the acquisition of new vestments, but is forced to resort to the existing (high) altars and ancient vestments (which are usually infinitely nicer)?

To avoid this inconvenience, leading representatives of the German Bishops' Conference have decided to sacrifice another pawn. After Walter Mixa, is now Tebartz van Elst's turn. As in the days of the sultans, it comes to secure their own domination how one gets rid of a pesky brother. Naturally this is not accomplished by sending a silk cord. The post-Conciliar love Church prefers character assassination, they are practiced and shoulder to shoulder with the anti-clerical media according to its traditional pattern. Tebartz is no longer acceptable as a bishop according to all that gradually comes to light is one thing. The other, however, is the way how he is systematically demonized and publicly executed. The extent of this manipulative and slanderous propaganda has long since reached the level of, "enforcer" or, "People's Observer". Witch hunt, Inquisition and Borgia intrigue are celebrated - in a new guise - and back with a vengeance.

And as if that is not enough, Robert Zollitsch insisted a few days ago. Very publicly he literally states: "I could not imagine that I could continue living." Of course he did this in an undertone that should have brought his concerns to his stumbling colleague. But it is worthwhile to pay attention to the exact meaning of the words. Zollitsch did not say, "I couldn't imagine, as I could go on living that way." The little word "that way" would be related to the way of life and brought the possibility of a correction to the expression. One can recollect, repent and live on in other ways. The word "there" means in this context, however, a time from which a new, irreversible situation arises - a situation that makes it impossible for Tebartz's afterlife according to Zollitsch. Maybe Zollitsch doesn't know the difference in meaning between modal and time clauses, but as chairman of the Bishops' conference, he should choose his words more carefully. With what he said, he has finally sent his brother in office the silk cord, his concerned tone, like the jewelry box, in which the cord is hidden.

However, Zollitsch and the other officials of the bodies Catholicism ought to foresee. The German Church-tax system is hanging itself by a silk thread. And unlike the silk cords used for strangling, this could tear in the not too distant future. The journalistic pack has long tasted blood in the air. The tactics observed in wolves to isolate a weak animal from the herd, in order to then tear him to pieces has proved successful. In the long term, each Bishop with a decidedly Catholic profile will be attacked. The strategy of the other members of the herd, to save his own skin by delivering others to the wolves will not work.

And who knows! Maybe one day it will even come to the point that tabloids will be the new vox populi in the appointment of bishops creating a list of three from which - after a suitability interview at ZdK - Spiegel appoints a candidate. He is then formally appointed by the Bundeskanzellor - and if need be can be deducted from her again. The sending of silk lines will be a thing of the past.

This is probably a good article but I don't have a clue what the writer is trying to say. Can you cut through the wordy fluff and give us the gist of it?

It's open season on Bishops who defend the Church's teachings.

The treatment of Bishop Trabart Van Elst is very like the way the Russian NKVD operated.
IE: Tell a victim everything is fine and then shoot him in the neck as in happy mood he leaves the building.

Father Weishaupt who's a canon from this neck of the woods says we should give Francis a chance. On the other hand, FatherZ says we shouldn't complain too much, lest the Catholic Church's traditions be "taken away from us".

The rapid demotion of Bishop Trabart Van Elst contrasts radically with the treatment afforded pope Francis,s appointment to the Vatican IOR bank of Msgr Battista Ricca around who have been made some exceptionally serious allegations. As far as I know the said monsignor remains in position.