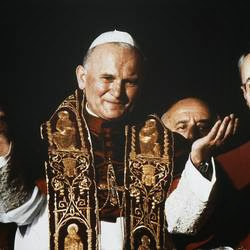 (Rome) Curial Archbishop Piero Marini, the master of ceremonies of Pope John Paul II, not to be confused with Monsignor Guido Marini, the master of ceremonies of Pope Benedict XVI., continuing under Pope Francis, held a lecture in Parona at the invitation of Pastore Caritas. Piero Marini, since 2007, who has been responsible for the International Eucharistic Congresses, spoke of his time with the Polish Pope, and perhaps talked more about himself than about John Paul II, especially in his descriptions which were justifications of his own work, for which he uses the Pope died in 2005 (who is to be canonized in 2014) posthumously as his leading chief witness. He also made what were nothing more or less than subtle swipes in his "advice", as to which decisions would wish to see made by the Church.

Piero Marini attracted negative attention after the resignation of Pope Benedict XVI. Once, because of his advocacy for the recognition of homosexual partnerships. On the other hand in an underhanded attack on the German Pope, whom he had obviously never forgiven for his dismissal as papal master of ceremonies and the initiation of a liturgical renewal away from Piero Marini's "Designer" Masses. In the words of the Archbishop released last April in an interview with El Pais he said: "One can already breathe the fresh air. It is a window that is opening to the spring and hope. Till now we have been breathing the bad air of swampy waters."

So John Paul II said jokingly to Marini in 1995 when he was papal master of ceremonies for eight years, "You are 53 years old and are still an acolyte? When I was an archbishop you were still an acolyte." Marini said: "I did not say anything, but inside I was thinking, if you would want, it would be because of you ..." Three years later, he was made Titular Archbishop Piero Marini in 2003. His successor Guido Marini was made Honorary Prelate of His Holiness with his appointment as master of ceremonies by Benedict XVI. Since, there were no more promotions.

Piero Marini was in charge of papal liturgies. John Paul II had left him "wide berth" as the Archbishop Curia said. Marini had intimated that John Paul II had not been so concerned with liturgical issues and had been so glad that someone else did it for him. Piero Marini comes from the Bugnini-school and was already active under Paul VI. in the Commission for the Implementation of the Postconciliar liturgical reform, introduced with the Novus Ordo. In Marini's representation it seems as if the Second Vatican Council had been decided and introduced a radical reform of the Liturgy with the Constitution Sacrosanctum Conciulium, which had to be carried out then. A veritable historical misrepresentation, which says a lot about the influential liturgist.

Thus, Piero Marini points out that his position as papal master of ceremonies there had allowed him to implement "efficiently" the guidelines of the Second Vatican Council: "It is the inclusion of some elements, at the entrance, the Offertory, which is part of the life of a country, where participants who are guests to the Mass will be instantly familiar. Also in song and sometimes even the dance." Piero Marini dug deeply for the dances: "John Paul II liked it all, he always wanted to share the customs and traditions ".

"When we were in Brazil," he had been asked if the dancers of the local ballet school could be involved, "and we had agreed. They are then on two stairways that flanked up the altar. During the dance, a wind arose and their light dresses had stuck to their bodies. Some prelates expressed their disapproval. They had not heard Pope John Paul II. I was the only one beside him and as he softly said, 'Beautiful, beautiful.' He looked at the essence." He continued: "During seminary they taught us to kill the body, but we save ourselves with the body. "

Piero Marini also tells an episode that is directed against the then President of the Italian Bishops' Conference, Cardinal Camillo Ruini. He had disapproved of it, that in the Youth Liturgy some teenagers were introduced that moved their arms during the celebration. The Cardinal had expressed his disapproval to the Pope directly: "Even in this case John Paul II made it understood that their presence did not bother him."

For John Paul II, who came from the Eastern Bloc, the Celebration Outdoors was Very Important

The Pope celebrated anywhere before hundreds of thousands, millions of believers. Very often, indeed almost always outdoors. Piero Marini wrote: "For him who came from communist Poland, where Christendom was banished from the churches, in order to comply with the ban, the Masses were set up to take place outside, in order to have visibility."

The Curial Archbishop told of an episode in a pastoral visit to a Roman parish. Because there was no space in front of the Church it was celebrated in the Church, although the many believers could not find a place. "John Paul II said to me that it should still be celebrated. I told him that that was not possible, there was only the street. He replied: "We would still have to celebrate outside."

Piero Marini: "The Eucharist originated in homes, for a small group of people. Jesus put it in the midst of the twelve Apostles, then the breaking of the bread took place in the first years of Christianity in small communities in houses. Certainly not in front of millions of people. It was inevitable that it happened, and we had to adapt, because the situation demanded it."

Link to Katholisches...
Posted by Tancred at 9:09 AM

Why on earth would one ever be watching ballet dancers dance during the Holy Sacrifice of the Mass? I can not think of any stateable reason that is not in conflict with the participation of priest, server or congregation in same according to the Doctrine of the Faith.

Since JPII was Pope and now will sadly become a Saint, everything he has done and said will be defended by the neo-conservatives as if coming from Divinity itself. Exacerbated by his charismatic style and likable personality to boot.

Neo-conservatives wait with zeal at this canonization for they will enshrine everything they hold dear and it will permeate through the decades to come; the New Mass as being just as good as the TLM, erroneous interpretations on salvation “outside the Church,” erroneous interpretations on religious liberty, minimizing of the harm liturgical abuse and interminglings with non-Catholics, and misconceptions on the nature of the Church.

But now the liberals will use it to their own agenda as well. They are prone to always manipulate any Papal text or action that has error or ambiguity, twisting it to their own liking. They salivate like a dogs circling a dinner table in wait for food items to be dropped. As such the ambiguous and scandalous actions of John Paul II will now be employed in their service: liturgical abuse, declaring people are saved outside the Church, banality in the liturgy and a mis-emphasis of the Holy Sacrifice, indifferentism, and of course anything they hijack from the Second Vatican Council since it was called by a Saint and perpetuated by one.

I am deeply doubting the extension of canonization’s infallibility with regards to the person being venerable but not insofar as they are in heaven. Unless some act of God stops this canonization my faith will be deeply harmed.

The revolutionist liars and thieves within The Church removed all the safeguards that would make canonizations "infallible".

I too am troubled by an up-coming canonization of Pope John Paul II. Pius IX and Pius XII are much more suitable. Is there no theological debate regarding papal infallibility extending to canonizations?

For John Paul II, the world was his stage, he was the main actor. The world loves John Paul II.......the great, but they despise Jesus Christ and His One Holy Apostolic Catholic Church.

I come from Poland. Holy Father John Paul II, .has left his native Poland (the Church) in havoc……..with more sects, then Poland has ever known. Exodus from one true faith in masses. False ecumenism on the 'rise'. In Communism, our Churches were open 24/7 full to capacity, today they are more and more empty......

A weak faith it is, then, Alexander, if you demand God to renounce His saintes to satifsy you. "Trust in the LORD with all your heart, on your own intelligence rely not" (Proverbs, 3:5)