Roberto de Mattei: Flood of Protest Letters to the Vatican for Franciscans of the Immaculata 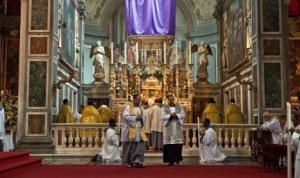 (Rome) After the crackdown on the Franciscans of the Immaculate became known, the historian Roberto de Mattei called for a petition for the benefit of the Order and to defend the Old Mass to the prefect of the religious congregation Cardinal Braz de Aviz, Prefect of the Congregation Curia, Archbishop Mueller, Vice President of the Pontifical Commission Ecclesia Dei Curia, Archbishop Di Noia OP and the Apostolic Commissioner for the Order, Father Fidenzio Volpi OFM Cap. In just the first 24 hours there were more than a thousand protests and petitions. These are also only those of which de Mattei was aware.

The Order itself has asked in obedience to the Roman and encouraged ecclesiastical discipline in the collections of signatures. However, this does not prevent believers from expressing their opinion in respect and moderate language to the Roman authorities.

The tenor of the letter to Rome, received in Italian, English, German, French, Spanish and other languages, is: The Decree of the provisional administration of the Franciscan Friars of the Immaculate Conception "constitutes an unjust act in regard to this religious Institute, whose honour it diminishes, but above all it represents a violation of the universal laws of the Church, in particular of the motu proprio Summorum Pontificum of July 7th 2007 of Benedict XVI, which has never been abrogated and which grants, to every priest, the freedom to celebrate the Mass according to the “extraordinary” form. This objective lesion of the right cannot but concern all those who believe and love the liturgical tradition of the Church and, also in the same spirit, who fight in defense of life, of the family, of the pontifical Magisterium and of Christian Civilisation," says Professor de Mattei. "This infringement concerns all those who believe in and love the liturgical tradition of the Church," says the historian.

There is also the possibility of the patch directly in several languages ​​to use in writing Professor de Mattei to use ( see here ). An indicator for the further development  will be  seen in what course the careers of the agitators in the Order and the Vatican take.

Text: Giuseppe Nardi
Image: Franciscans of the Immaculate
Posted by Tancred at 9:13 AM

Email ThisBlogThis!Share to TwitterShare to FacebookShare to Pinterest
Labels: Franciscans of the Immaculate, Immemorial Mass of All Ages, Petition

Writing letters of protest is an excellent idea. As the article states, it's important to express our opinion in respectful and moderate language. We are more likely to be taken seriously if we are respectful. I'll send letters in the next few days. Thanks for posting the article.

Excellent idea.
I hope the Vatican is literally flooded with protests against them for the unfair and vicious persecution of the FFI priests,brothers,sisters,and cloistered nuns. I also hope that it becomes such a huge protest that this little man Cardinal Aviz has to resign in disgrace. He should never have been there in the first place.

I remember how the new rite was de facto imposed on the Church all those years ago by the pastorally inept Paul VI. The British hierarchy asked for and got an exception from him. But really as successors to the Apostles they did not need his permission. All they had to do is ignore it in their dioceses, as that Brazilian bishop did. Then Paul VI proceeded to require a retirement submission at age 75 and replaced the traditionals with progressive appointments so that after some years the situation was completely reversed . All this reminds me of the first Latin speaking Pope Victor I imperiously demanding Asia Minor accept the Roman dating of Easter. With vigorous response from the bishops there and St. Irenaeus, the Pope backed down. The push back must be strong, questioning and constant, all the while being respectful. To me it was indicative of how unaware the bishops at the time of the imposition of the NO of their apostolic authority to continue tradition. This was likely the result of the one-sided understanding of the papacy following Vat I. Though I think a re-introduction of much, but not all, of the ceremonial of the NORMATIVE traditional rite now called extraordinary (meaning de facto, not de jure)would be what Vat II really wanted instead of Paul VI's Mass for most Americans in the vernacular with Latin elements in the ordinary prayers, I fully support the natural expansion of the use of the traditional Mass. I do this because the present NO DOES NOT SUFFICIENTLY OR ADEQUATELY MANIFEST THE PRESENCE OF THE HEAVENLY LITURGY DURING ITS CELEBRATION. The ATTITUDE of the clergy at Mass even when reverent DOES NOT MANIFEST THAT WE ARE SIMULTANEOUSLY CELEBRATING THE HEAVENLY LITURGY WHILE ON EARTH.

I know, your personal opinion is a lot more powerful with caps.