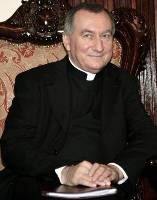 'The career development shows that the Vatican diplomat comes from the school of former Secretary of State Cardinal Angelo Sodano and is close to him."

This proves that the Vatican is totally CORRUPT to the core. So is Pope Francis. Don't forget that in the conclave of 2005, and again in 2013, as Cardinal Bergoglio he was the favorite of the radical liberals, and the decadent, corrupt shadowy forces in the Vatican lead by Cardinal Sodano (and his underlings: Cardinals Re, Bertone, Sepe, Tauran, Kasper, Grochelewski, Rylko, Sandri, and of course, Archbishop Piero Marini).

This group did everything they could to undermine, negate, stall, and destroy the rulings and initiatives of Pope Benedict XVI who they hated. They were against him until he gave up and abdicated the Papacy, opening the doors wide open to the radical Pope Francis, and forces in union with him and Sodano.

There will be no reform of the Roman Curia. This appointment of a protégé of Sodano proves it.
Perhaps he's another Monsignor Ricca. Personally, I hope so....I hope there is dirt to dredge up about him....scandal etc. It would be another blow to Pope Francis and the Vatican II Church, and the Sodano regime.

It would be totally deserved!!
Let's hope he's another Ricca ( who apparently is still in office. To think that a pervert like Ricca will be made a Bishop is disgusting, and a scandal)

Parolin is a protege of Sodano.

Sodano was a protege of Casaroli.

Sodano was a protector of Marcial Maciel.

One consolation is that Pope Francis might not be around long enough to put his own people in all the different offices in the Vatican.

I will not argue against your assertions in the first paragraph, I do not know of all the men you list but I am inclined to think you might have a point and your concerns here might be valid.

But I am sad to see Catholics publicly wish for the death of the Holy Father. Can we pray for him instead?

Not everyone who posts here is a sincere Catholic much less a Traditionalist.

And I don't think anyone was actively wishing for his death, but there's no sin in being relieved when a wicked man goes to his grave.