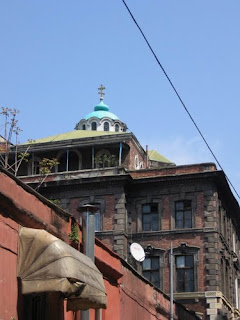 (Istanbul) On 2 August Christians gathered in the ancient Russian Elias chapel to celebrate the feast of the Old Testament prophets, according to the Julian calendar, the Catholic, Orthodox and Armenians commit it to the 20th of July. But in Turkey all Christian affairs are complicated. The chapel, which is located in the attic of a former monastery, may not be used for the liturgy for about 40 years. The Russian community of Istanbul, the ancient Constantinople, now wants to revive the chapel. The movement came into being as plans became known to demolish the former monastery and chapel.

In Istanbul there are three Rus Kiliseleri associated along ethnic lines. All three belong to the small Belarusian community on the Bosporus. And all three are in the possession of the monastery of St. Panteleimon on Mount Athos, better known as Rossikon. However, they are administered by the Ecumenical Patriarchate of Constantinople. The Elias chapel is the oldest of the three Rus-chapels Istanbul. It was built 135 years ago in the typical style of the 19th Century. As the Rossikon, the Russian monastery on Mount Athos of monastic Russian refugees was founded after the Mongol invasion, was the Elias chapel after the October Revolution of 1917 the spiritual center of the Russian exiles in the city.

Russian Elias chapel in the attic of a former monastery, which is now availed business.

The chapel houses frescoes, icons, traditional iconostasis, but the damage from moisture and lack of maintenance. The frescoes are largely lost. Preserved is a crucifix and a depiction of Christ near the altar. For the restoration 100,000 Turkish liras are estimated according Kazmir Pamir, spokesman for the Belarusian Association PAE Fukaraperver, says the Turkish press.

The Athos monks have a Turkish company for the repair. Exactly how and when the restoration is to be done, there are no details from Turkey. "The liturgy on the 2nd of August is the first step," said Pamir. "Maybe we can soon celebrate a baptism or a wedding. The Church is alive, she has just made another first breath."

The repair is not the only problem for the Belarusian community. How Kazmir Pamir explains the chapel in the Turkish official registers will be seen as business premises. In fact, the former monastery now houses shops and offices.

The chapel could soon fall victim to the Turkish construction boom. The city administration has a plan for a large project in Galataport on its desk that will transform the historical neighborhood of Karaköy radically, situated on the European shores of the Bosphorus. The project envisages the privatization of the existing port of Salipazari, the construction of a tourist harbor front, plus hotels and a large shopping center. The Dogus Holding is active in banking, construction and communication sector, has received the contract last May to implement the project, which is currently estimated at 702 million dollars.

Galata port is only one of several government projects whose the appearance is the sign of Istanbul tourism, large infrastructure and re-Islamization. These projects gave the initial impetus for the anti-Erdogan protests that erupted in May in Gezi Park and on Taksim Square. The Government remains committed to the projects and speaks of the "inevitable necessity" because of population growth and to stimulate the economy.

Efforts to rescue and repair of Elias chapel could also lead to a rapprochement between the Moscow Patriarchate and the Ecumenical Patriarchate of Constantinople. Holy Mass on the 2nd August was celebrated as a Greek priest. "The Russian Church recognizes the authority of the Patriarch Barthalomeos over the chapels of Karaköy," says Kazmir Pamir.

Link to katholisches...
Posted by Tancred at 2:20 AM

He seems like the kind of man who will. Pray for him. Men who love Christ and tell His will are better than those who
won't.

The feud between the 2 was exasperated in 2008 over the jurisdiction of the Belorussian Church. This is ongoing tiff.
Don't forget that he tried to throw the Monks out in Athos.
http://vaticaninsider.lastampa.it/en/world-news/detail/articolo/grecia-greece-grecia-26846/

No wonder the Greeks don't trust him, he had the Abbot jailed upon returning from Russia with the Virgin's belt.