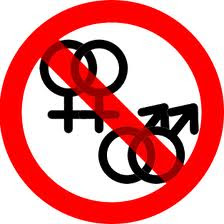 (Paris) As was already known from the USA, Germany and other countries where"gay marriage" or civil unions for homosexuals was allowed, the introduction of "gay marriage" is proving to be a flop in France. Three months after its introduction into force through the ruling Socialists in step with aberro-associations, with the frightening ferocity of the political and cultural struggle in the legalization of "gay marriage" it has been generally seen that it was just quicksand. Proponents of Lex Taubira responded not, as claimed, to a "state of emergency" to end discrimination against a "large number of homosexual citizens," as claimed by President Francoise Hollande. The now uncovered figures reveal that it was not about anti-discrimination, but about ideology.

The numbers tell a revealing story. They represent the "most important project since the French Revolution," just as a narrow-minded ideological struggle. 90 days after the introduction into force of "gay marriage" only 596 aberrosexual couples have "married". The result is abysmal compared to the effort, which almost led to the proclamation of a police state to bludgeon critics of the law. It is also embarrassing when you consider that registered gay partnerships were legal in France prior to the new law. But the ideology as the tyrant of happiness knows no mercy and is ready to step over bodies if need be.

The first "gay marriage" of France was celebrated with a great media circus and enforced by the world's leading media big screen. The big boom of the "discriminated" homosexual who finally "married" may, however, fail to materialize. According to state radio France Inter, the registry offices of French cities have reported only modest crowds. Paris is the front runner where there were just 241 "gay marriages". In second place, with only 37 "marriages", is Nice, then it becomes quite thin.

The goal was not "more civil rights," but destruction of marriage and family

Even a left pamphlet in the fight for "gay marriage" such as Le Monde had to admit that this was a "slow start". If you put the experience even of other countries based on the first days after entry into force of similar laws, the biggest crowds then drop rapidly toward statistical insignificance, we know that France has already left its "gay marriage" zenith. So then, why all the fuss? By now, obviously, what the critics of the new law of Manif pour Tous have repeatedly emphasized in recent months: the stated ideological goal of the new law is the destruction of traditional marriage and family.

There are just 596 gay couples, for whom, with unusual pace and force, "which could have been worthier of a great showing," said Il Foglio, a special law was pushed through Parliament. You can now, since the new socialist legislation also makes it possible, adopt children. The socialist majority government under President Hollande championed "gay marriage" despite any difficulty and especially not in view of the growing criticism from the French population. Instead, the opponents of the law are to be forced to be happy. Another law provides punishment for any criticism of the aberrosexual agenda. The magic word is "homophobia". Anyone who thinks otherwise, will be exposed until "the reform is accepted," said Il Foglio. The like of this has ever been seen in history. The close alliance between the left and the liberals after the collapse of communism for control of Europe, makes for getting your hands dirty.

Le Monde now confessed in an editorial, cherishes the hope that "the flame of anti-gay marriage rallies are gone and the reform will be accepted by the society." "That this was admitted the flagship of Hollande's social battle that the protest and resistance against gay marriage is impressively strong and that the French people in no way accepted a homosexual marriage imposed from above in their minds," said Il Foglio.

But the law has legal force, it does not provide for conscientious objection, although such was initially recognized by President Hollande. In reality, it is a red flag for the Democrats of the Left. And because the acts of Jacobins are "benevolent" at all times, the mayor of Bollène, Marie-Claude Bompard has been charged in Vaucluse. The first citizen of their community had boldly declared not to accept "gay marriage" on the basis of conscience and their Christian faith. She is looking into the law as an attack on the rule of law, and therefore believes that the new law is unconstitutional.

Promptly they found themselves aberrosexual activists to set an example. Two lesbians wanted of all things to be "married" in Bollene. Bompard refused to perform the marriage ceremony and also refused to entrust this task to someone: "That would have been just a ploy to steal from me the responsibility," said the mayor. The gay activists immediately filed a complaint. The mayor is threatened by the new law with up to five years in prison and a 75,000 euro penalty. Bompard is not the first case ( see separate report ). French mayors who reject "gay marriage" have formed their own trade association.

The opponents of "gay marriage" and unnatural adoption rights for homosexuals are now fighting a new battle. They want to enforce the right to conscientious objection. Manif pour tous is doing so with a view to "gay marriage", child protection organizations do it with a view of the law that allows homosexuals to adopt children. The fight has been brought before the Constitutional Court.

I wish for a strong Manif pour Tous showing in this country. I pray for grace and strength for the courageous citizens in France who continue to resist this aberration even though it is now law.

This is exactly correct. The so-called gay marriage is not about marriage at all, but about the destruction of nature. In Massachusetts, the first U.S. state to allow it, there has been a collapse in both civil and church marriage as well as increasing pressures in the areas of gender autonomy. "I am what I make myself, not who God made."

This situation in the U.S. also began with two, ahem,
lesbians. Inheritance tax being at issue, New York Edith Winsor-Thea Spyer. It seems this case led to opening the "floodgates" of the "rights" for the (1%), like in France.