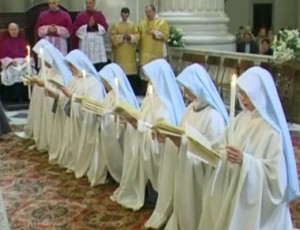 If Traditional Catholics surge in huge numbers to protest this unjust action of the Vatican, there is a good likelihood that the Vatican will be forced to back down and perhaps recind the decree altogether.
This ignorant Cardinal in charge of religious should be booted from office.
Likewise, if the Pope himself , if he strays so much from Catholic teachings (regarding gays, divorce and re-marriage etc) and tradition as it has always been taught (even by mediocre Popes like John Paul II), or if he attempts to suppress Catholic liturgical tradition, so should he likewise.
Goverments of countries etc sometimes have violent military coups which overthrow a corrupt or bad regime. Traditional Catholics, if outraged or pressed to far by the actions of this Pope, could stage a verbal coup against the Vatican, denouncing the Pope and the administration and demanding resignations.
They could not continue in the face of such a storm of protest. And any disciplinary actions they would attempt would just stir the forces all the more.

The only loving option is to renounce any attachments to the Vatican II council and its man-made religion. Mr.B/current claimant to the "Chair" was not even properly ordained to be a priest, but merely installed to be a presider over the assembly by the new rite of ordination? Therefore,how can he be pope? Popes bless their predecessors and do not contradict.

More to the point and more easily understood - Bergoglio is a serial spiritual adulterer. He is not satisfied with practicing his Catholic faith and exercising his office (however poorly he does it) - he actively participated in non-catholic worship and memorial services (jewish, evangelical and muslim). He is like the hebrews of the old testament who fell into worshipping the pagan idols of their neighbors. Get in his face and the face of your local bishop the next time he visits a synagogue or mosque to participate in one of their worship services and demand that he either recant or be deposed. We as faithful Catholics are contributing to his sins against the First Commandment by standing by and doing nothing about it!

The answer here is NOT to attack the pope or suggest going into schism. The answer is always obedience but here with a humble but firm response to this unjust action where those who dissented from the holy founders had the upper hand in this more 'progressive' atmosphere.

Sometimes it seems that God forbids anything of beauty to long last....well, I rephrase for it is the demon itself that causes division and where pride and arrogance on the part of some have brought about this day.

You keep saying that, but it's obviously not the answer.

False obedience has no virtue.

He's the Pope, treat him with some respect.

You are absolutely right. I can't stand these so called "conservative Catholic" websites or people, who no matter what weird, bizarre, sick, peculiar or even downright blasphemous thing a few recent Popes have done (Popes Bergoglio and Wojtyla especially---Wojtyla being John Paul II for those who don't know---these people still cry "JP II, we love you", or "yes Holy Father, No Holy Father....whatever you say Holy Father." etc. etc.
EWTN is a perfect example. So are several supposedly "conservative" Catholic blogs and websites.
I swear that if the Pope one day (God forbid) would say that in order to get people more involved we're now going to discard the Mass and worship like the Pentecostals do, or that we're now going to allow gay priests, women deacons, and intercommunion with Protestants they would cheer and scream 'Viva il Papa". That's NOT being Catholic....that's being brainwashed.
I am sure that Our Lord Jesus Christ didn't mean when he instituted the Church with Peter as it's first visible head that whatever the Pope says goes....even if it departs from the traditions and teachings of the Faith, his predecessors, and basic Catholic beliefs.
What JP II did during his long term, and what Pope Bergoglio is doing quite often, is a departure from the Faith, and does verge on the blasphemous. I fully expect him to outrage faithful Catholics and do more.
Bu there comes a time (as with this horrendous action against the Franciscans of the Immaculate and against Catholic tradition), that you have to say no to the Pope and Vatican. You have to organize to oppose him and the Vatican....so that hopefully they will get the message and back down...or risk massive problems in the Church.
This Pope and his advisors by going against the Franciscans of the Immaculate and Catholic tradition are monumentally wrong. They have stirred up a storm which if they continue on their path, I hope whips up into a hurricane of opposition which will sweep them from office.
Pope Benedict XVI was an old man who quit because he couldn't handle opposition and problems. Pope Francis is an old man who is opening himself up to massive opposition. Perhaps he might decide to do the same thing.

I believe that if Catholics would read some of the opinions of certain Saints, Doctors and great Catholic authors on what they thought of some of the Popes of their day they would have heart failure. Sharp criticism of Popes, when they needed criticism, by fiercely loyal Catholics was a common thing in ages past.

The following is a quote from the Directory (n.30, in the section on obedience) of our Book of Sanctification. [The Directory follows the Rule, Traccia, and Constitutions, and represents THE authoritative and practical application of the former. We daily profess to be faithful to the Book of Sanctification when we renew our vows and consecration to Our Lady each morning]:


Our loyalty to the Founding Fathers should be a commitment of gratitude; for the Immaculate has put in their hearts the charism of our foundation and only from them can we receive the sure guidance to live according to this charism and make it fructify in all its riches and fecundity. This is a great grace to be able to have recourse to them as long as they live, in order to receive from them the truest light of our charism, which they alone have received in fullness and carry in their hearts precisely to give it to us, their sons. Let us be generous in our prayers for them!”

2008 – Fr. Stefano M. Manelli, Founder of our Religious Family, the Franciscan Friars of the Immaculate, was re-elected by acclamation for a third term as General Superior at the General Chapter of the Order in 2008 and the election was approved by the Congregation of Consecrated Life.

2009 – Fr. Stefano and Fr. Gabriele, together with their General Counsel, begin implementing Summorum pontificum making a clear choice to move in the direction of the Tridentine Mass and Breviary (Vetus Ordo, extraordinary form of the Roman Rite) for our communities with a note on pastoral possibility and never with an attitude of exclusivity of the ordinary form of the Roman Rite [Missal of Pope Paul VI, Novus Ordo]. Here is Fr. Gabriele M. Pellettieri (co-Founder of the Order) expressing the desires of Fr. Stefano and the General Counsel.


July 11th, 2013: Fr. Stefano M. Manelli is removed as General Superior of his own religious family by the Holy See as the best solution to heal the internal divisions among the Friars and the Vetus Ordo is restricted to special permission only from the competent authorities as of August 12th, 2013.

"Pope" Francis both by actively participating in jewish worship services and his statements about his participation manifested a belief that he was worshipping the Almighty through these activities. Accordingly, he already possibly is latae sententiae excommunicated. As faithful catholics we need to be asking these questions. Sedevacantists can join other catholics in this and don't need to premise their questions about "Pope" Francis based on theories that other catholics don't agree with, e.g., invalidity of rite of ordination, etc. All catholics should agree that Catholics can't worship the Almighty using both Catholic AND jewish worship services. A prelate that follows this rule it would seem has made up his own faith!

My understanding is not just "participated in", but facilitated and hosted:

If Rome cared about the order, they would have simply told the six dissenter priests to leave it and go elsewhere.