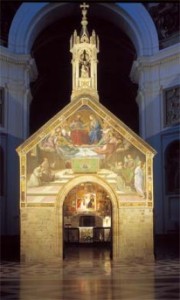 (Assisi) until midnight of the 2nd August, the so-called Portiuncula indulgence, a plenary indulgence for the remission of temporal punishment can be received, which is also known as "Absolution of Assisi". On Saturday, the 3rd August is celebrated a sung Mass in the traditional rite in the Portiuncula chapel inside the Papal Basilica of Santa Maria degli Angeli Assisi at 9.30 clock.

Portiuncula indulgence - The Forgiveness of Assisi.

In one night of the year 1216, St. Francis of Assisi was lost in prayer in the Portiuncula chapel. Suddenly a very strong beam of light came into the chapel and Francis saw Christ on the altar and on his right the Virgin Mary and angels. The Lord told him to ask for an indulgence for the chapel for the salvation of souls by the Pope.

St. Francis went to the Pope, asking him for help to rescue the souls. The saint was asked what he wanted for the salvation of souls. "Holy Father, some time ago I restored for you a Church built in honor of the Virgin Mother of Christ. Although I am only unworthy and a sinner, I ask Your Holiness to provide a comprehensive and generous indulgence without an offering. "Pope Honorius III. asked him what he should grant as a discharge and how many years. The saint replied: "Holy Father, not years, but I pray souls." The Pope asked how he should do it. Francis asked that all the faithful who come to the chapel, have gone to confession, are remorseful, have received absolution from the priest, that all believers who do that, are freed in heaven and on earth of pain and guilt from the moment of baptism until the moment they enter the chapel.

"That's a lot," said the Pope, pointing out that it was not customary for such indulgences to be granted. Francis replied: "What I invoke here, I implore not of myself, but in the name of Him who sent me, in the name of Jesus Christ." Then the Pope granted the request of the saint. Because of the protests of the cardinals and prelates present, insisting that thereby the indulgences granted to the pilgrimage to the Holy Land and to the tombs of the apostles Peter and Paul would be negatively affected, Pope Honorius specified that the "Forgiveness of Assisi" can only be obtained on a single day of year, the second Can be obtained August.

St. Francis thanked him and walked away. The Pope had to call him back because yes no act had been issued for the indulgence yet. But the saint of Assisi said: "If this is the work of God, He will make known his work. I don't want a document. The Blessed Virgin is the paper that Christ, the Father and the angels are witnesses."

The "Indulgence of Assisi," the Portiuncula Indulgence can be gained today in every Franciscan Church (Franciscans, Friars Minor, Capuchin Franciscans of the Immaculate and all other orders of the Franciscan family) in the whole world. It can be received only once a year.

Conditions A) visiting a Franciscan church, a parish church or another Indult church from noon on the 1st of August until midnight on the 2nd of August and prayer of the Our Father (the affirmation of the dignity of a child of God) and the Creed.

B) the Sacrament of Penance to enter the state of grace (repentance and absolution) in the eight days before and after the second August.

D) prayer for the intention of the Holy Father (at least one Our Father, one Hail Mary, or another prayer to confess membership in holy Church, the visible sign of the unity of the Pope).

E) interior attitude of the will to want to avoid sinful behavior.

The B - D conditions may be satisfied eight days previous to A and to eight days thereafter. However, the Holy Church recommends that the conditions C and D are fulfilled by the 2nd of August or in the time mentioned under A.