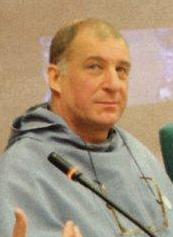 Edit: many want them to go quietly into the oblivion shared by those religious orders that have not remained true to the vision of their founders, but they don't intend on going quietly.

(Rome) Following the exposure of Vatican Insider as the mouthpiece of the rebel group in the Order of the Franciscans of the Immaculate, it is aptly trying to limit the damage for the sake of balance. This includes an interview with the only official spokesperson of the Order, Father Procurator General Alessandro Maria Apollonio. Father Apollonio expressly rejects the attempts to reduce the provisional government of the Order by the Congregation of Religious to "internal tensions" that have nothing to do with the traditional Roman Rite.

From the interview it appears that there is a small minority in the Order, which is known to be led by Father Alfonso M. Bruno, but that this alone would not have been able to be effective. The input of six brothers in the Order to the Vatican Congregation offered but others obviously can find, against better judgment, a welcome pretext to act against the Order.

The interview also reveals a certain weakness of the Pontifical Commission Ecclesia Dei, whose significance seems limited. The Commission had previously approved the procedure of the General Council of the Order with the introduction of Vetus Ordo. However, this official confirmation had no relevance for the Congregation of Religious.

Some things the matter of the Franciscans of the Immaculate, are so fundamentally different, the two questions are reminiscent of the final stages of officially frozen unification talks between the Society of St. Pius X., and the Holy See. The Superior General of the SSPX, Bishop Bernard Fellay, spoke in the fall of 2012 that "signals" had come from Rome, which made ​​an agreement seem possible. Indeed, such was already virtually certain at Easter 2012. But then everything changed. The "conflicting signals" were interpreted as a synonym for a power struggle back in Rome back ( see separate report ).

Some seem to suggest that the Order of the Franciscans of the Immaculate constituted an example to be directed against the Old Mass. Still unclear are the exact relationships, such as whether it would deter other orders, also to discover for themselves the traditional form of the Roman Rite, or whether the examples were even targeted against Ecclesia Dei communities. In tradition-bound circles, the scope of the attack quickly organized a protest that has been recognized and grown, which does not seem to have unimpressed Rome.

The interview was conducted by the Vatican expert Andrea Tornielli.

Why was an Apostolic Visitation of the Institute approved by authorities in the Vatican?

Because it was demanded by a minority among the brethren who no longer share the leadership of Founding Father and General Minister and the desire to promote the Vetus Ordo next to the Novus Ordo in the institution, as required by the Motu Proprio Summorum Pontificum and the Instruction Universae Ecclesiae.

How important was the question of the old Missal in connection with the apostolic visitation?

It had great importance because said group of brothers accused the founding father to have imposed the Vetus Ordo on the entire institution. The accusation is absolutely false, but it was believed, and all our attempts to convince the proper authorities that it is false, were to no avail. Meanwhile, the false assertion by various media and news agencies became more widespread to cause serious damage to the reputation of our founding father and the institute.

Websites related to tradition interpreted the message of the provisional administration and the decision to stop the use of the old Missal's permission, as undermining the Motu Proprio of Benedict XVI. Do you share this view? How do you comment on the appropriate decision?

Father Lombardi has clarified that the measures do not undermine us regarding the Motu Proprio. However, we are waiting for an authentic interpretation of the liturgical rules of the Holy See that affect us. Indeed, it is not clear, for example, who the "competent authorities" are, of which the above authorizations may be granted: the Commissioner, the Congregation of Religious, the Pontifical Commission Ecclesia Dei, the local bishop, one or the other or all together?

We hope that this is a temporary disciplinary action, and that we will, as soon as possible, again allowed to celebrate in the Vetus Ordo, as we have always done, and that without the current restrictions that rob us of that, even though the Motu proprio Summorum Pontificum and the Instruction Universae Ecclesiae have higher universal force.

In the corrections to our articles you have always stressed that the use of the old Missal was not exclusive and that all decisions were made in accordance with the provisions of the Motu Proprio. Is it true that the Ecclesia Dei Commission had asked the Franciscans of the Immaculate to exercise prudence in the Apostolic Visitation, regarding the manner in which the use of the old Missal will continue?

Yes, and we have acted with utmost restraint and in complete respect of our particular law, which confers the General Chapter "the highest authority in the Institute" (Constitutions, § 81). It was just the most recent General Chapter in 2008, which stipulated that the General Council (i.e. Father Stefano M. Manelli and his five consultants) to create a detailed protocol for the introduction of Vetus Ordo in our communities. This introduction was performed with the letter dated 21 November 2011. The Pontifical Commission Ecclesia Dei was invited in advance as a precaution d to examine the letter, and they realized that it was equivalent to the mens Holy Father Benedict XVI. This official assessment took into account in any way for the further development of our affairs. The thing seems inexplicable to us and it hurts us a lot. We have confidence in our cause the heavenly Advocate, Queen of the Seraphic Order.