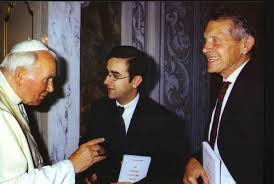 (Paris), Xavier Dor is 85 years old. The French doctor has been working for 20 years to protect the life of unborn children. On 26 June, he was compelled to appear in court in Paris, so to speak because he had prayed the rosary publicly and without permission.

Xavier Dor, President of the Catholic Right to Life Association SOS Tout Petits. A court case was initiated against him based on "exercise of moral and psychological pressure." The doctor had given a pregnant woman a pair of baby shoes in front of the entrance to a feminist organization in which they wanted to apply for an abortion.

All because of a pair of baby shoes

The 85-year-old is accused of entering the office of the feminist association twice to give two pregnant women a pair of shoes for newborn children, who applied for the killing of their children there. This action, according to the indictment last Friday, had been an act of "extreme violence" through "moral and psychological pressure."

Guilty of Praying the Rosary

Founded in 1986 by Dor, the Catholic Right to Life Association SOS Tout Petits has prayed the rosary since the early 90s in front of abortion clinics. With the prayer, they pray for the end of the killing of Innocents by closing the clinic or Abortion Association. They pray that pregnant women do not realize their intention to kill their child in the womb. They pray for the conversion of abortion doctors and other staff participating in abortions. Not least, they pray as an act of reparation for the murder of children.

Xavier Dor has been summoned to appear on 26 June before the criminal court because of the indictment, to answer charges that on the 2nd of April in 2011, he is to have "incited" to pray a rosary in front of the Saint Vincent de Paul Hospital in Paris without permission. The doctor risks a penalty of up to two years in prison and a fine of up to 30,000 euros.

A crime against God

The prosecution called last Friday for "only" one month of detention and an 8000 euro penalty. The judges are due to announce their verdict before the approaching holiday until the 16th September.

Dor has already been convicted and imprisoned in the 90s due to the implementation of an unsanctioned rally for the right to life. The doctor's books are Le Crime Contre Dieu (The Crime Against God, Paris 1998) and Le livre blanc de l'avortement en France (White Paper of abortion in France, Paris, 2006) about the threat to the right to life. Dor is with SOS Tout Petits among the first promoters of the French March for Life .

Link to katholisches... AMGD
Posted by Tancred at 12:14 AM

We can say they're, the new evil dictators, are this , that, and the other thing. But really they are sick and sickening.

In another age the abortionists would be in prison.

He shouldn't have gone into their office. Sorry. Out in the public thoroughfare, absolutely, and giving shoes is a good idea. But not crossing a threshold.

Possibly shouldn't have gone in, I don't know what the rules are in France. But giving baby shoes is an act of "extreme violence"?!?

I recently came across your blog and have been reading along. I thought I would leave my first comment. I don’t know what to say except that I have enjoyed reading. Nice blog.The post is written in very a good manner and it entails many useful information for me. I am happy to find your distinguished way of writing the post. Now you make it easy for me to understand and implement the concept. Thank you for the post.
integrated receivables management

I wish I wouldn't have to publish this as anonymous, but I don't have any of the other required accounts for posting. Anyway, just wanted to say may God richly bless this kind doctor, and may God open the hearts and minds of the poisoned souls running the abortion clinics and governments of France.