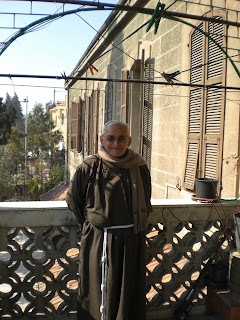 Edit: he helped everyone. He helped Muslims, Christians, anyone who was in need and now he's gone. May his soul rest in peace.

(Damascus) Father Francois Mourad, a Syrian hermit, died in the Franciscan monastery of Saint Anthony of Padua in Ghassanieh. The hermit was a guest at the monastery when it was attacked by Islamist rebels. The Franciscan Monastery is located in the district of Jisr al-Shughur in the province of Idlib, near the Syrian-Turkish border. The area belongs to the Chaldean Syrian territory. The Franciscan Authority in the Holy Land confirmed the death of the hermit. The monastery was partially destroyed and looted.

They were not "rebels" or "extremists". He was killed by those who faithfully practice their religion of evil.

Pray for us, Father Mourad. R.I.P.

But wait! When their imams publicly condemn the act and apologize to all Catholics, all the "good" muslems will seek out the killers to bring them to justice.

Look at The Tenth Crusade. Christian village in Syria massacred by Syrian rebels.
These terrorists, our government is supporting. We are an
Evil Empire.

I'm afraid you can thank for this atrocity the US government, the giant multinational corporations, the worldwide media, the military-industrial complex, Israel and all the bloodthirsty armchair warriors who want to put an end to the Assad regime. These creeps (using, of course, our tax dollars) are finding Muslim militants, paying them and training them to prepare the ground for what will probably be an invasion by the totally and completely corrupt US empire. The blood of these innocents is on the hands of those mentioned above, not the Muslim stooges who are doing their dirty work for them.

While I am certainly not excusing the men who did the direct killing I am also not going to forget who created this horrible situation, those mentioned above who promote abortion, sodomy, unjust wars of aggression, usury and every kind of vileness.

Muslims have been happily murdering Christians long before the US was formed.

They have also not been murdering Christians. This resurgence is very much a result of all the entities named
by Aged parent.

I tell you what. What the U.S. is doing is atrocious. Do you think for a moment that the U.S. would support this kind of chaos or even stand by and watch it happen in Saudi Arabia?
Absolutely not. The U.S. supports the Saudi Regime. The U.S.
is not concerned about human rights and democracy breaking out there. The U.S. would covertly support the oppressive, brutal Monarchy/Regime with all necessary means.

He isa martyr like Bl. Charles de Foucauld.
The U.S. Supports Islam and is bringing many many thousands to the U.S. and paying for them in many cases. This govt. is an enemy to its people.