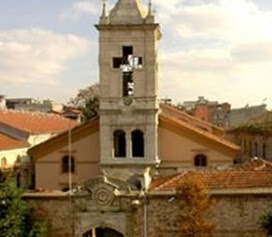 (Constantinople) At an Armenian church in Istanbul an unidentified man fired seven shots from his rifle on Sunday. Panic broke out among the believers who were gathered in the church for Easter.

The Turkish press reported that an intimidation campaign took place yesterday against Christian communities of Istanbul which concerns Surp Hovhannes about the Armenian Church. As the Armenian Archbishop Aram Atesyan said, the gunman threatened the Christians in the church, "You are too many!" As the Archbishop said, a young Armenian Christian was beaten on Sunday in front of another church in the nearby district Samatya. Other Christian communities of Istanbul were also victims of assault and intolerance in the past days.

In Atesehir a group of 40 people attacked the New Hope Lutheran Church on 27 April. They pelted the church with stones and smashed the stained glass windows. The next day, a group plundered the Greek Orthodox Church of Burgas Ada. All the incidents took place in Istanbul.

According to Archbishop Atesyan “with these attacks they want to stoke fear among the members of our communities” who in Turkey have been repeatedly victims of violence and discrimination in recent years. In 2006 the Catholic priest Andrea Santoro was murdered in Trabzon, in Malatya three Protestants in 2007 and 2010 in Antioch, the Catholic Bishop Padovese.

Link to Katholisches...
Posted by Tancred at 8:11 PM