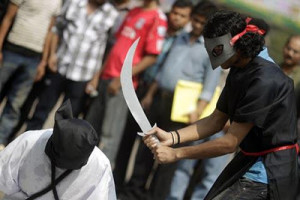 (Riyadh) A Saudi court has sentenced two men to several years of imprisonment and additional flogging, because they have helped a woman to become  Christian and to escape from Saudi Arabia. The daily newspaper Al-Hayat has reported this . The criminal division of the city of Al Jabar has sentenced the Lebanese Christians to six years in prison and 300 lashes. The second man, a Saudi citizen, was sentenced to two years in prison and 200 lashes. Both were colleagues of the woman and announced to appeal against the judgment.
The case became known in 2012, as the media reported on the illegal departure of the Saudi woman, "the young woman from Al Jabar" is how she became known. Saudi women can not leave the country without the consent of their fathers, husbands or guardians. The young woman is believed to be currently in an unknown location, probably in Sweden.
The father of former Muslim woman from the area of ​​Al-Khobar, which was converted to Christianity, had identified the two men. The charge was that they had convinced the woman to give up Islam and helped her with a fake passport to escape from Saudi Arabia.
In the Wahhabi Kingdom, one of the strictest Islamic countries of the world, the Sharia is Islamic law is applied in a particularly radical form. Muslims who convert to another religion can be sentenced to death. Therefore, the woman had left the country hastily.
According to press reports, the woman has taken refuge in Sweden, where she is protected by a charity. The young woman appeared last year in a video which was posted on YouTube in which she explained to profess Christ and to have accepted Christianity through baptism.
The father of the woman called  the Saudi government to return his daughter  in November 2012. The Saudi embassy in Sweden has been active in "diplomatic channels".
Text: Giuseppe Nardi
Image: Asianews
Posted by Tancred at 9:01 AM

Sharia law in Saudi is only mildly more radical than many other Muslim countries. Kuwait, Nigeria and Malaysia (to name a few) are almost equally fundamental in their attitude towards Christians.

Everyone needs to call the U.S. State Department and tell them to formally complain to the Saudi low-life Princes and to the bleep bleep U.N. .

its ok when their Saudi spoilt princes bed non muslim women. then no need to check their shariah!