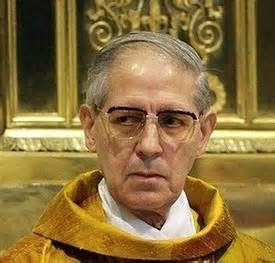 Edit: While the SSPX and other Traditionalist societies are growing, the Jesuits are not only scaling back their commitment to Catholicism, but they’re all scheduled to retire by 2018 in Spain.

(Madrid) What happened to the glorious order of the Jesuits, from the spiritual forces of God on earth, the Order to its founder, the former Spanish Captain Ignacio de Loyola, organized like an army that fought in close formation, and in which every soldier a lone fighter?

The Order was feared for centuries. But his mention in some circles sparked reactions, inferior to none in Catholic circles as Freemason saying goes.

What became of the Order, that won all countries in missions or won back to the Church those lost, and almost accomplished the Christianization of China and Japan?

Its spiritual power and thus its influence was so great that they had the mighty Bourbon rulers in their corner and not just because they met the economic interests of a few grandees, stood in the way with their Indian Reductions and their defense of the dignity of the Indians. The Order survived its ban from 1773 to 1814 in the underground, existing openly only in Orthodox Russia.

The formation of a Jesuit takes much longer than in other orders. And Yet!

The signs of decay and exhaustion leaves the largest Catholic religious organization to shrink more and more. A proverb says: There is nothing, where at least one Jesuit doesn’t have his fingers in the game. So the Jesuits were heralded and outstanding defenders of the Catholic faith, but for some decades there is hardly a bizarre byway, where even the Jesuit would not tread.

The situation in Spain, the heartland of the Order, is dramatic. In 2014, the five historical religious provinces of Spain are to be merged into a single province. Currently in Spain there are still 1,393 Jesuits, a large number, but their average age is 70. Many can not or only exercise their office to a very limited extent. In five years, the Order in Spain reaching the age limit of 75 years and will probably number less than 1000 members. 2018 will force the Order to that magical retirement threshold introduced by Pope Paul VI..

The Order is leaderless. The great absentee, the "Black Pope" Adolfo Nicolas Pachon, who is the 30th General of the Order since 2008 directs the fortunes of the Society of Jesus. He seems no less absent, as God the great absentee in Nicolas' recent sermon last Sunday in Valladolid (full text) is.

According to the General’s recent sermon pdf, the Order of the Jesuits is reduced to a humanitarian NGO, whose purpose is to help others, but not to lead them to God. This is remarkable, because Pope Francis, who joined the Jesuit Order himself, has repeatedly rejected the Church's role as an NGO. In his order, the words of the Pope, have not reached the General and his fellow brothers. For Father Nicolas reduces the spiritual life to an absolute minimum, but rather a life in which everyone actually does what he wants, because everything is inspired by God somehow.

Clearly, some one needs to form a new Jesuit order: The "Observant" SJs or OSJs, perhaps?

They need to be ordered by the pope to return to the original duties of their order.

If they not gathereth with the Catholic Church (ie Christ) then they scattereth. Do we really want to see our religious orders go the way of errant non-Catholics sects? Jesuits, Observant Jesuits, Free Jesuits, First United Jesuits, Reformed First United Jesuits? Let them be Shepherded back rather than allowed to wander further into the brambles and be lost forever.

Wow…this post tingled my toes. I’m so full of admiration and respect for firefighters in general and now you in particular Stewart. Thank you for sharing.
Accounts Software For Small Business
Simran Kaur

Jesuits as a Society has caused enormous damage to the Catholic Faith and the Catholic Church as a whole.The society was suppressed between 1773 and 1814.Is it required once again ?
It is time now the present Our Jesuit Pope who chose the name of FRANCIS orders the society (looks like he has no loyalty or sense of belonging to the society any more)to go back to the roots and correct itself for the very purpose the society was founded by Ignatius Loyola.
All the members of the Society ,probably,be evangelised/retrained first and converted or else the educational Institutions ,most of them, are anti- Catholic
and perverted minded.All of them must be sent for true and strict Ignatian Retreats.
St.Ignatius intercede and come to the aid of the ailing religious order you founded.

in which ways are they "perverted minded"/?