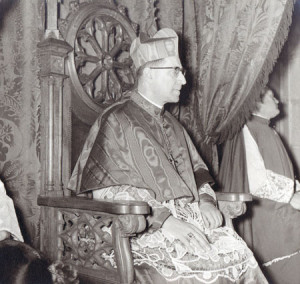 (Genoa) In 1975  Giuseppe Cardinal Siri, Archbishop of Genoa (1946-1987) published in the  his diocese newspaper some thoughts on church development. The then 52-year old cardinal was in 1958 considered as the favorite and preferred successor of Pius XII. to the papal throne. In the conclave of 1963 he was the victim of Cardinal Montini, the future Pope Paul VI.
.
"[...] You read magazines and books that openly contradict what has defined the Council of Trent; accepted forms of thought that were explicitly condemned in the encyclical Pascendi of St. Pius X., condemned as much in his decree Lamentabili; rehabilitated Loisy; draws the historical value of the history books of the Scriptures in doubt, raises the destructive theories of Protestants like Bultman to a standard; listens indifferently to sets of authors beyond the Alps even if they attack the center of divine revelation, the divinity of Christ. If one rampantly circumvents the  principles, one naturally gets the ecclesiastical morals and discipline that one wants. Considered under this general perspective that progressivism is to treat the revealed truth as relative, to change it as soon as possible and to give man a freedom with which in a short time he knows not what he should do, and in the face of the Absolute. Once arrived on this line, “progressivism” is congruent with  "relativism" and nothing is left to the “adored" man, not even his hopes! Of course, not all people who are considered progressive, share these contexts. But they do accept the consequences and the logical conclusions of them, which they know nothing. If they have a fault - God will judge! - then it consists in not by asking why its what they fanatically take sides."
Cardinal Giuseppe Siri in the Rivista Diocesana Genovese January 1975.
Text: Cordialiter / Giuseppe Nardi
Image: Cordialiter
Trans: Tancred

George Weigel’s writeup on Cardinal Siri strikes me as condescending. Frankly, I have a hard time reading anything this man writes.
Posted by Tancred at 10:23 PM

Of George Weigel, a hard time, Ditto. He points to the irony and the American Episcopacy being victims of the irony but doesn't seem to see himself as a victim of this irony. Condescending
as always. I hardly read him because I can hardly. So am I mistaken that he's so much a victim of Vatican 11 ism and America ism?

He consistently underrates the significance of the Church’s struggle with Febronianism, Gallicanism and breezes over the Risorgimento like it’s a step of progress.

Pray to overcome our natures. said...

Weigel ceased to be Catholic long ago. He is just to arrogant to have figured it out yet.

Weigel. Another German who hasn't conquered his irreverent, arrogant nature. Too much pride. Which is probably why Anonymous 1:25 AM, having humility instead of pride has not been afflicted. Count your blessings.

to Pray to overcome, Indeed I do count my blessings. And I do know that one is that German is in my bloodline but I'm
am removed from the society. My German bloodline is from one grandparent, two greatgrands and before these I don't know. My grandmom was the best and most saintly.