An Appeal to the Manif Pour Tous in France Against Aberromarriage 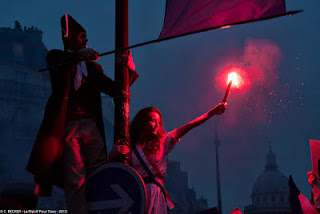 [Galliawatch] The Manif Pour Tous, on the occasion of the promulgating of the law known as "marriage for everyone", issued the following appeal to all Frenchmen concerned about the law and its consequences for France and for civiization:

This law consecrates the abolition of the fundamental principle of marriage between a man and a woman. It implies, through full adoption for everybody, that a child presumably can be born of two men or two women; it consecrates the law of gender despite the universal nature of feminine and masculine sexual identities. It is a major upheaval of civilization!

Note: "Gender" is a term imported to France from the United States. It refers to the fantasy that a baby is born "neutral" and is free to "choose" to be a man or a woman. This "gender theory" is now being taught in French schools.

We have not ceased, for many months, alerting Monsieur Hollande about what the stakes are. We are profoundly offended by the arrogance and the contempt displayed for months both by the president of the Republic and the ministers, the legislators and the CESE.

Read further and scroll down...

It's uncertain if these sorts of staged events win over anyone or discourage anyone, but this one certainly points to the demonic in our mind:

[Huffington Post] A topless activist of the FEMEN movement was arrested inside Notre Dame Cathedral Wednesday, one day after far-right essayist and historian Dominique Vesser committed suicide in the Paris landmark.

The bare-chested woman was photographed in front of the altar, pointing a fake gun at her mouth. The slogan "May Fascists Rest In Hell" was written across her torso.

FEMEN leader Inna Schevchenko commented to Le HuffPost that the protest was a message to "anyone who supports fascism and who honored the memory of the extreme-right militant who committed suicide at Notre Dame."

I pray that Manif Pour Tous will continue to be as strong as this strong statement.
The Femen seem not to have any idea how ugly,
distorted and ickey they look.

Anonymous 24 may 6:50, Thanks for your comment. All Catholics should read E. Michael Jones. So should everyone else.