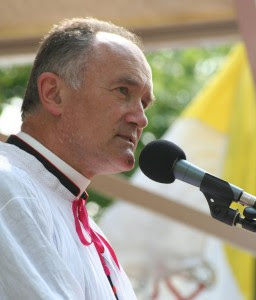 Even Card. Kasper admits intentional ambiguity in the Council.

Becuase the whole purpose to be Modern, no longer Medeval. And we see what lukewarm, fence sitting, ambiguity begets. Relativism.

Good for the SSPX. Criticize away! I'm sick of delusional people who go on and on about how great Vatican II was while meanwhile Catholic Churches and institutions close every day and even the Catholic who "practice" know so little and take so little seriously after decades of poor catechesis

For pity's sake! I'm growing exceedingly weary of SSPX stomping it's feet like a petulant child and demanding that the Holy Father in Rome fail to be a parent.
We have one Pope, our current Holy Father, Pope Francis. If SSPX doesn't like the idea that they need to VERY carefully re-examine their own attitudes, ultimately Pope Francis (or his successor) will likely be forced to formally denounce the Society.
As to the merit of various misguided efforts within the recognized Church body politic, it would be wise for SSPX to remember that SSPX, itself, offers no help at all in instilling holiness in the overall faithful so long as the Society's members insist on holding themselves apart.

You can't catechize if you can't bring yourself to show up for the fight.

I'm a lot more weary of other people ignoring the fatal problems of the violently conflicting and self-defeating agendas at work here.

You can't catechize if no one knows what you're talking about.

The town were I go to mass the bishop and two priests sat down during holy communion and let two girls aged 18 and and twenty with mini skirts on give out holy communion to the people. Same parisha very holy priest was removed by a sacraterion lady because he dared to use insence during the missa cantata latin mass she went into a rage with the smell of insence also the same church the lay people put obstuctions in front of the alter or table to make sure the latin mass is not welcome.

Yeah, I guess the SSPX should shut up about a Protestantized Mass, bizarre ecumenical activities (did you not see the 'Hanukkah 2012' video?) and a lack of action being taken against the likes of Schonborn. Let's all be quiet and and go with the flow.

The things Sebastian describes here are bizarre. We've all heard or even seen more bizarre though it hardly seems possible. It further seems hardly possible that every Catholic isn't considering going SSPX.

The SSPX isn’t a parallel Church you can really join. It’s just a priestly Society which good Catholics can support as per Cardinal Hoyos.

That's what I mean Tancred. Join them and support them. Be among them. Worship with them. ...And when I say bizarre I mean that in the real sense. I don't think this is only a matter of liberalism, progressivism, modernism. It is strange-ism. Honestly it must be Satanism taking them unaware.