Belgium: Archbishop Venerates Our Lady as He’s Attacked by Anarchists 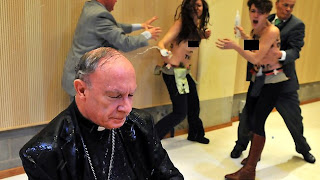 Edit: this isn’t the first time Archbishop Leonard Mutien has been attacked by the disciples of impurity. At another point, he was assaulted by a pie. The effeminate attack was launched against the Archbishop, whose communications director quit in a fit of rage earlier over the comment, because he said that AIDS “was a form of intrinsic justice”. I think now is a good time to point out that the good Archbishop, whom we’ve described in the past as the Lion of Belgium, is still there doing his job, despite a few faithless colleagues and a vicious anti-Catholic press.

What was also interesting about the press coverage from newscom.au is that the journalist accused the Archbishop of kissing a water bottle. It’s just one more of those times when the things Catholics do escape the basic understanding of profane minds. Actually, the Archbishop kisses a plastic image of Our Lady, which had been blasphemed by the Femen anarchists who attacked him with the water within. It’s a particularly touching image to see him so reviled and full of love. 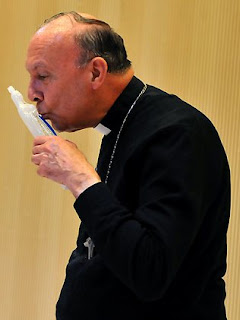 I love him very much.

I don't know him but I love him now!

Write him a letter. I'm going to. I'll let you know how to when I find the most direct.

Anonymous 3....PLEASE be sure to share his contact info. This good shepherd deserves to know he's loved along his own Via Dolorosa.

There is much controversy surrounding Archbishop Leonard. Most coming from the Belgium Church. That would be the Vatican II, New Theology, Modern i.e. Deviant Church. The Belgian hierarchy and the Church they lead are for the most part opposed to ++ Leonard's conservative even orthodox theology. As are the secular governmentals all.
Then came controversy among conservative Catholics outside Belgium due to statements made by the Archbishop concerning the role of women in the Church. He did not (to my knowledge) say that Eucharistic Ordinations should be opened to women. But it was thought by many that this is what he implied. I don't know if he implied this. Although it seems that he not in the habit of implying. It is one of the foremost reasons that the Belgium Church attempt to marginalize. even isolate him, shun him, because he is "too" "idiotically" outspoken concerning traditional theology.

We pray for you - keep up the good work

I admire the Archbishop and deplore the ridiculous behaviour of the protesters, but to say AIDS “was a form of intrinsic justice” is equally as ridiculous.