Edit: another feature of Pope Francis that might provide an indication of what his approach to the Liturgy and sacred art will be, are the things he likes.  According to Nick Squires, the Pope’s favorite “painting” is Marc Chagall’s Crucifiction: 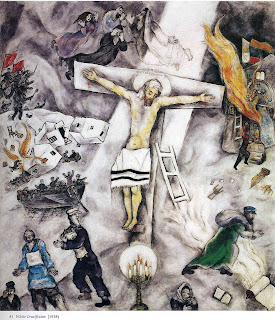 His favorite film is Babette’s Feast:

A Review on Rotten Tomatoes:

The Danish/French Babette's Feast is based on a story by Isak Dinesen, also the source of the very different Out of Africa (1985). Stephane Audran plays Babette, a 19th century Parisian political refugee who seeks shelter in a rough Danish coastal town. Philippa (Bodil Kjer) and Martina (Birgitte Federspiel), the elderly daughters of the town's long-dead minister, take Babette in. As revealed in flashback, Philippa and Martina were once beautiful young women (played by Hanne Stensgaard and Vibeke Hastrup), who'd forsaken their chances at romance and fame, taking hollow refuge in religion. Babette holds a secret that may very well allow the older ladies to have a second chance at life. This is one of the great movies about food, but there are way too many surprises in Babette's Feast to allow us to reveal anything else at this point (except that Ingmar Bergman "regulars" Bibi Andersson and Jarl Kulle have significant cameo roles).. ~ Hal Erickson, Rovi

The Jewish Jesus...I suppose that a very many people do not know that God is not Jewish. The Gate is Narrow but the Gate is Open. It is the Holy Mission of the Catholic Church to teach the Truth. I hope the Pope will lead them.

His Holiness' opinion of Babette's Feast:

"There you see - said Bergoglio - a typical case of exaggeration of limitations and prohibitions. The protagonists are people who live in a Puritan Calvinism exaggerated to such an extent that the redemption of Christ is lived as a denial of the things of this world. When comes the freshness of freedom, the waste for a dinner, they all end up transformed. In truth this community did not know what was happiness. He lived crushed by pain ... he was afraid of love. " Him, which was read by Professor Jorge Luis Borges to his students, he says that you have to go to a Church "regulator of faith" to a Church "which transmits and facilitates the faith."

I have seen Babette's Feast and it's quite Catholic and it would be great if more films of that kind were made. http://catholicphoenix.com/2010/11/22/self-denial-and-self-giving-babette%E2%80%99s-feast-as-catholic-symbol/

God is Beauty Truth and Goodness and that painting is not really beautiful to me. It is kind of like a pictogram, symbolic moreso than lovely, it makes you look around at the different parts of it and try to think what its message is.

I would echo Elizabeth's remarks. The film presents catholic thinking at a number of different levels and is quite sublime.

As for the painting, everyone is entitled to their particular tastes. We are commenting based upon someone else's statement - a little tenuous at best.

The idea that there are no objective standards of beauty in the world is one of the most destructive ideas in the modern age, and it's a small tragedy that our Holy Father doesn't appreciate this fact.

Fr. Robert Barron discusses the story, Babette's Feast, in his book, Eucharist. I have no familiarity with the source work, but I found the idea compelling of a Catholic scandalizing the puritanical protestants with the rich feast. As to the painting, my tastes are medieval, so no arguments with you there.

The painting is ugly. It is meant to be ugly. The artist Chagall is Jewish. I guess it's one of those 'everyone can draw his own conclusion' things.

I am not a Chagall expert but am somewhat familiar. You should see some of his depictions of Jesus and of the Blessed Mother in stained glass. Is it only style ?

"When comes the freshness of freedom, the waste for a dinner, they all end up transformed." Yes I have seen the movie. One our local priests, himself an "amateur" but very good gourmet cook, recommended it. Maybe it's a "clergy movie" since they seem to like it -- I assumed the feast was methaphor for the Eucharist. Anyway, I find the pope's thought I referenced above quite surprising for one who has a much-advertised "austere" style of life, who supposedly dines simply himself, and who preaches the "gospel" of social justice. "Waste for a dinner" doesn't sound very Pope Francis to me, at least it's not in accord with his publicly crafted image. I find this man to be a mass of contradictions -- pun intended -- and very confusing to listen to or read. A critic of the Puritans is he ? Wouldn't many people describe Catholic teaching on sexual matters as excessively Puritanical ?