The Church’s Enemies Lick Their Chops at the Resignation of Pope Benedict XVI. 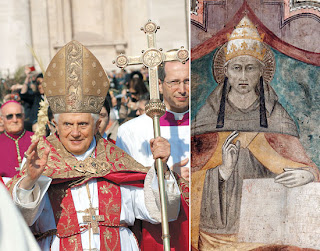 The singularity of Pope Benedict’s decision has awakened the greed of the anti-Rome circles.

[kreuz.net] At the Consistorium of the 11th of February 11th 2013, Pope Benedict XVI announced to the assembled Cardinals his abdication of the Petrine Office entrusted to him on April 19th 2005, as “my powers in consequence of advanced age is no longer enough, in order to execute the Petrine Office in a reasonable way”  -- it was probably the most unusual step, which one could expect from a Pope.  But perhaps not only from a German Pope,  who also saw the last days of John Paul II, and experienced the marked limitations and personal sufferings first hand.


This is where the German interpretation of the virtue of duty (and the understanding of their physical incapacity) on the interpretation of his predecessor, whose longtime personal secretary and present Archbishop of Krakow, Cardinal Stanislaw Dziwisz, put it clearly: “One does not climb down from the cross!”

The Holy Father had drawn only a small circle into his confidence about himself, making his decision after repeated examination of conscience before God. Even for Cardinal Angelo Sodano, the Dean of the College of Cardinals it was "a bolt from the blue," German Cardinal Meisner was "totally shocked": "The ministry is indeed a kind of fatherhood. The father indeed one remains one all of his life.”

Nevertheless, the step is the Pope as sovereign over Christendom is respected per se as legitimate - if he was right, however, we do not know.

That of anti-clerical as well as inner-church anti-Roman side now tries falsely to conjure a desacralization of the papacy, which is only an expression of their political will.

So for example, one of the leading Italian Freemasons, Ernesto Galli della Loggia of all people, tries to get a foot in the door to the Vatican: "If it is possible, namely, that a pope resigns - and a centuries-old practice at the highest summit were overturned - then so other innovations are possible. Then, just as other age-old practices … may be overthrown. “

Galli speaks to the Curia, the mode of determination of the next pope: "Can not ... the election of a pope be subject to a handful of old male oligarchs ...? May the power of the Congregations still be in their own hands? Is it acceptable that there is still a boil that exists like the IOR, the Vatican Bank? “

These violent attacks by the representatives of an organization that is not suspected of being in too close proximity to Rome to show one thing: The fact that it has not yet managed to establish themselves in the Curia, and that the Vatican Bank (probably one of the few banks) is not controlled by them - one should rather look after the scandal of the Banca Monte dei Paschi di Siena and its ousted (Masonic) CEO Giuseppe Mussari and the role of Mario Draghi, the current ECB chief.

Greed of the Flower Children

In a similar horn blow the Left-Catholic anti-Roman troops are summoned, who now bring their remote corny jokes out of mothballs from the time of 1968 again: women priests, "opening oneself" for democratic structures of localism (trans. media-driven election of bishops) that the Church of Rome has to "get away from the Roman centralism” reconsidering abolishing the celibate clergy, and “allowing open, humble, compassionate, especially to the people who live differently than the equivalent officially-ecclesiastical doctrines"(remarried divorcees and Homo-erroneous).

What the Church needs the least, is a self-secularization by political functionaries and transparency afforded by the media, as the gateway to the Vatican.
Link to kreuz.net...
Posted by Tancred at 5:19 PM

Strange how the world cares about the teachings of the Catholic Church only when it wants her to change them.