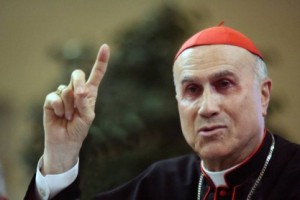 The former Pontifical Catholic University of Peru, whose acronym of PUCP has shrunk in UP, does not have enough teachers who are willing to teach without church permission at the university.
The outcome of the meeting chaired by Cardinal Bertone was a "serious blow” all around to the new Prefect, such as Andrés Beltramo Álvarez wrote for Vatican insider. To the Roman Curia  the question is whether the "new German” in Rome "is really the right man for such a central post, which requires maximum discipline and allows neither improvisation nor formal or editorial errors".
Text: Giuseppe Nardi
Image: Corrispondenza Romana
Katholisches….
Posted by Tancred at 9:54 PM

Muller will be canned under the next Pontiff...tis why he was NOT promoted as a Cardinal.

Exactly, Mr. Potillor. Archbishop Muller's less than orthodox theology certainly did not help his cause in receiving a red hat.

That and muddying the waters of the discussions with the Society of St. Pius X by attributing things to Benedict XVI he never said.

Yes, Archbishop Muller definitely does not at all appear to want anything to do with the SSPX. So much for ecumenism. Guess it only applies to heretical sects.

I am repulsed by Muller in many ways. He would be not be welcome under this Catholic's roof.

All of a sudden we hear of a small amount of embarrassment and distress for certain prelates who have been riding high on their own arrogance for decades. Mahony vs himself and now Bertone vs Muller. Interesting to see them get a tiny bitchslap from one of their Modernist peers. Is there more of this to come? Especially if they think the papacy has just been tossed into their ring? Will the bone thrown into the cage set all the savage dogs upon themselves? Will power hungry prelates who have long ago ceased to be Catholic begin to feed upon one another? Let the cannibalism begin!

White Smoke being reported by the SSPX USA site.