Swiss Bishop Attempting to Derail Reconciliation with the SSPX 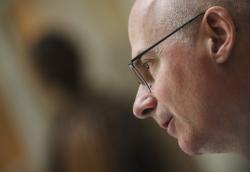 Edit: His Lordship, the Bishop of Lausanne, appears as ill-informed about the dialogue as he is unwilling to concede good will on the part of Bishop Fellay. For someone who had participated in the dialogue, he is suspiciously unwilling to admit what other Church figures have been willing to admit, that there are two forces controlling the dialog. There is one which is willing to grant the SSPX recognition without any expectations, and there is another force which is completely uninterested in reconciliation and will look for pretexts and attempt to create an atmosphere of distrust.

Many blogs have pointed out that Protestant heretics are allowed to use Church property in the Diocese of Lausanne, but will dissident groups also be allowed to use these facilities? It seems to us that the SSPX's only true crime is that they have the temerity not only to hold, but to teach the Catholic Faith as well.

Here's the article in German from the Radio Vatican webpage:

Switzerland:  "The Society is Irresponsible"

[Radio Vatican] The Bishops of Lausanne, Genf and Fribourg, Charles Morerod reiterates his skepticism about the SSPX. In an interview with Vatican Radio, Morerod, who was before his episcopal ordination part of a Vatican dialogue commission with the Society, made a statement on Wednesday evening about a decree that prohibits the use church space in his diocese by the Society.

"I am surprised that we're speaking of it now, because I have published this decree. It was the decree but in September 2011 was decided by the Episcopal Conference, from when I did not even belonged to it! So I thought it was already prepared on my desk when I became a bishop, and was told that the Bishops' Conference each of its members were given the freedom if they wanted to publish it or not. The Bishop of Sion and the abbot of Saint-Maurice have therefore published a decree in January 2012, the bishops of Basel and St. Gallen then in February 2012. When you consider that the seat of the SSPX is located in the jurisdiction of the diocese of Basel and the seminary at the area of the Diocese of Sion, I am astounded that they did not show any reaction, more than that year. "

Moreover, the decree also say regarding the SSPX anything new compared to episcopal directives from the year 1999.

"There's really nothing new in this regard - almost nothing new. Except that at one point there is an update, because the text of Benedict XVI was quoted from the year 2009. So I waited before the publication of the decree for a year because I wanted to see, first of all, the evolution of the dialogue. And I have to say I was disappointed in how the dialogue developed " [Wishful thinking, perhaps?]

This disappointment was associated mainly with a book of one of the bishops of the SSPX: It examines the theology Benedict XVI. , accusing the Pope several times "without talking about the grist" before, to be heretical. That was indeed "serious" says Bishop Morerod.

"But I said then: After all, not even the Superior General of the SSPX, who wrote that. This one - that Bishop Fellay - but had asked the other bishops to be more conciliatory. So maybe there was hope? But then I see in November 2011, the text of a sermon by Bishop Fellay, who said among other things: we can not recognize the so-called New Mass as it is allowed. I said to myself: Well, really - this shows that our dialogue did not help much. And then Fellay said in a sermon: We are in terms of the dialogue now, back at the same point where we were in 1975 already. He asserted practical: What we have done, has brought nothing, except that it has probably worsened the situation even "!

[Bishop Fellay has never said anything about the way the Holy Father says Mass. We're afraid that such gratuuitous leaps are unhelpful, unless they're meant to help those who don't want the SSPX situation resolved.]

"Deeply irresponsible": this is what Bishop Morerod took from what the head of the SSPX then declared in December during a visit to Canada. There are, according to Fellay, the "enemies of the Church," namely "Jews and Freemasons" who sabotaged the talks in the Vatican with the Society and halted it.

"This is deeply irresponsible, not only because it is a very harsh criticism at the Vatican, but also because the story we ought to have taught that one should abstain from such a manner of speaking about the Jews better! The Council's teaching and the visits of John Paul II and Benedict XVI. in the Roman synagogue, which have criticized the way the SSPX always show a different face of the Catholic Church! And I do not want priests, who claim to be Catholic, the Catholic Mass as, classify bad 'or the Jews call enemies of the Church, because I think this is disturbing. "

And yet the western Swiss Bishop was afraid to flatly describe the SSPX as "schismatic". Their classification by the Roman Catholic Church is currently even now "unclear".

"It's not clear, because the Church sought to use its benevolence in its approach. But when a bishop of the Society, without being denounced, accuses the Pope of being a heretic, the Superior General, then the describes the Eucharist, which the Pope celebrates, as ' bad ' rank and insist that it brings 'the loss of faith with itself', I would say: This provides at least serious trouble for unity! "

Morerod indicates that he has not spoken with members of the SSPX in his diocese. Although he was willing to meet, but there is in the west of Switzerland not so many SSPX. That talks with the Society could ultimately lead to their agreement with the Vatican, the Bishop looks decidedly skeptical. Finally, the attitude of Fellay has "hardened since last fall even further."

"But when I'm away too pessimistic now - all the better! Finally, I would be the first one would be happy if things should be all right after all. A decree as what we - I emphasize: not only I, but we bishops - have signed, can be indeed change again if the situation changes. That would be even better. "
Link Radio Vatican ...
Posted by Tancred at 9:24 PM

I'd like to see Bp. Morerod write a detailed refutation of Bp. Tissier's "Faith Imperiled by Reason: Benedict XVI Hermeneutics" explaining why his claims of heresy are false.

Wow. I didn't know The Pope had so many mouthpieces.

Lots of people claim to speak for the Pope and seem to get away with doing it even though they seem to enjoy some kind of endorsement as ecclesiastical mouthpieces. Tornielli is one example of many.

Tornielli indeed! Weigel is another! That self-called "official Vatican newspaper" should be tossed into the sea. There is little difference anymore between it and the "Catholic(sic) Reporter".

There is no bishop among the Modernists who has the fiber to go up against His Lordship Bishop Tissier de Mallerais because they do not have a defense based in reality that could withstand his scrutiny. It would be suicide on their part and they know it. Much easier and safer for them to just run about with their hair on fire and scream "Schismatic!" "Excommunicated!" and the funniest of all to me..."Out of full communion with the pope!". That last one really cracks me up. I hope it is not sinful to laugh as hard as I do at their absurdities.

Gregory XVI called, in his Mirari Vos (Dz. 1690, what was later removed from Denzinger!), the "religious liberty" that become enshrined in Vatican II's Dignitatis Humanæ a "deliramentum" ("insanity"). I wonder what he'd call today's insanities…