The Caritas Vienna transferred funds from the contributions of Catholics in the acquiring of the destruction of the weakest of men, the unborn. This according to a report out on "Gloria.tv" of November 2010.

The document makes a"hearty thanks" to Caritas Vienna, that a client of Caritas had secured a social tarif of 100 Euro for the clinic on Fleschmarkt and that the client had already "received the award" from us (therefore Caritas Vienna) and the amount will be paid in cash.

Caritas is funded by church contributions. According to the financial management report of 2011 by the Church it received 1.5 millionn Euro. The head of Caritas Vienna is Fr. Michael Landau.

Anyone who has doubts about the authenticity of this letter, let him address himself to the responsible bodies, such as the:

- Caritas of the Archdiocese of Vienna under Fr. Micahel Landau

-or to the President of the Austrian Caritas, Franz Küberl.

No one will deny the authenticity of this letter.

In keeping with the practice of Caritas is the de facto consent of Cardinal Schönborn on abortion to the press at ORF in 2006.

One can not avoid the impression that the charity is on the way to turn Holy Church into a money oriented, social club, to soften the nature of Holy Church and decompose it from within. Otherwise it's not comprehensible that the Caritas funds from Church donations by Catholics are put to misuse and contributes to the destruction to make an end of the lives of so many innocent people -- even though it is the express will of God, not to kill!

From Caritas to the Anti-Clerical "Green"

So it is no coincidence that the national director of the Neo-Marxist Postmodernist Party "The Greens", Stefan Wallner, who has changed directly from Vienna Caritas to the morally destructive Greens and then from there has raised a visor for the political works engaged in the protection of trees and shrubs, obtaining the destruction of the weakest people, the unborn.

And still further, it is probably no accident that Pope Benedict XVI. has decreed in his Motu Proprio "About the Service of Charity". It says, among other things:

In carrying out their charitable activity, therefore, the various Catholic organizations should not limit themselves merely to collecting and distributing funds, but should show special concern for individuals in need and exercise a valuable educational function within the Christian community, helping people to appreciate the importance of sharing, respect and love in the spirit of the Gospel of Christ. The Church’s charitable activity at all levels must avoid the risk of becoming just another form of organized social assistance

The mission of Caritas is therefore neither abortion, the alienation of church money and the widespread misuse of the Austrian social system, nor the abuse of asylum and the associated degradation of the rule of law. 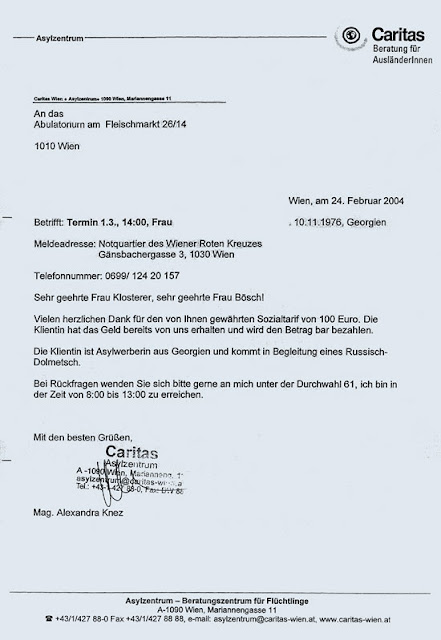