Arson in Three Churches in Lower Austria as Yet Unsolved 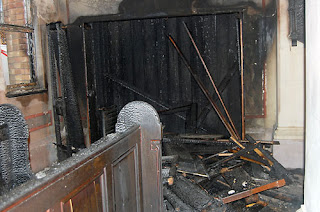 Anti-Clerical incitement of hate in Austria for the last years has brought first "fruits".

On the 23rd of December 2012 three churches in the city of Amstetten were set afire.  The area with over 2,300 inhabitants it situated in western Lower Austria.

The most seriously damaged is the church of the Franciscan School Sisters.  The fire spread from the confessional to five pews.  The church will have to be closed for half a year for the clearing away of the burn damage and the complete renovation.

In the two other churches (city parish church and Herz Jesu Kirche) the damage is less.

A police drawing of the suspects has been published.

Diocesan Bishop Klaus Kung stressed in his sermon for the year's end of 2012 the necessity of "a renewed (new) effort for the spreading of the Gospel."

Thus is "everyone, who is close to the mysteries of our Faith know, what they require and correspondingly prepare", what is obviously no longer the case.

The superficiality of the knowledge of the Catholic Faith in the wake of the Second Vatican Council (or better: the abuses in the name of the Council) is no longer concealable by the Bishops any longer.

Also its "disquieting phenomenona" like the disturbing of the peace in St. Pöltener Cathedral by the ORF  recently about "Pussy Riot" -- as a copy or the people's eagerness against the alleged ecclesiastical privileges are a sign of a "certain change of mood" in the land.

Bishop Kung, "spreading of the Gospel" where? And to whom? Haven't you heard from your fellow modernist bishops that conversion to the Catholic Faith is no longer necessary in view of their new "doctrine" on ecuminism?

Interesting.What's in it for him. I thought he is in Bejing taking care of business at the confusion center or whatever it is.Wonders never cease though.