Archbishop Müller: Truth is Not Subjective -- Relativism Leads to Intolerance Against God 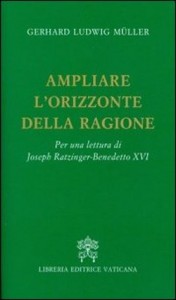 (Vatican)  It is not appropriate to call on the Catholic Church, if it is related to mercy and love of neighbor,  then to assert however, that some ethical truths are subjective.  This is essentially curial Archbishop Gerhard Ludwig Müller's statement presented in his latest book published in the Vatican publishing house, L'Ampliare orizzonte della ragione. Per una lettura Tues Joseph Ratzinger-Benedict XVI (Expand the Horizon of Reason  Readings of Joseph Ratzinger- Benedict XVI.) this morning in the Paul VI International Bookstore for Propaganda Fidei.  Principally, it speaks to the Italian Parliamentary election, but other countries are also applicable.

"I have been told regarding Italian politics before the election by politicians  and representatives of the intelligista  that the Church needs to speak of love, of charity and the mercy of God, but the truth, that is subjective and applies to the feelings. There is only my truth.  There is no objective truth, they say," says the Prefect of the Congregation of Faith.  "But without a foundational truth no reality is possible, because God is reality and mercy", as the new Prefect of the Pallazzo del Sant'Uffizio explained.

In this context, Müller wanted to speak to politics. "Without an ethical basis, with the rejection of God and without Faith, it is impossible in Europe and North America, to solve all the problems of today," he said. Because these issues affect "not only the market and economics."

His book takes the Regensburg speech of Pope Benedict XVI. in 2007.  "The relativism applied to the truth is not only a philosophical conviction, but speaks unavoidably in its intolerance against God",  he continues

With his new book, Archbishop Müller wants to offer readers with a hand up for an introduction to the collected works of Joseph Ratzinger-Benedict XVI.

Would that Muller practice what he preaches.

May we hope, on the other hand, that he may be changing his more controversial views?

We shall wait and see.