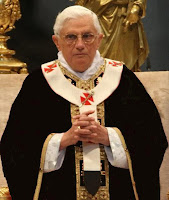 Edit: the following is a commentary on the season by the Canon Lawyer of Aachen, Father Gero Weishaupt in our translation.  Of course, the Holy Father is saying Mass today in black.

The Roman Rite provides the color black in both of its forms in Masses for Souls (also called Masses for the dead or Requiem, exsequies), where in the so-called ordinary form of the Roman Rite, purple may also be worn. Red is worn at the Requiem for a Cardinal. The color white is not designated. To wear it is an abuse. Because behind this color there is another believe and consequently a theology in relation to the state of the departed after the entrance of death.

While Catholic belief speaks for two thousand years (purgatory or Beatific Vision), there are currents in the Church, which speak of a "Resurrection of the Dead". The intermediate state is rejected. That's what the color white expresses. Here is shown once again,m that the faith itself is expressed in the manner of celebration (to which the Liturgical colors also belong). Liturgy is celebrated Dogma. Lex credendi lex orandi, says Prosper of Aquitane.

What and how I believe, I express in the form of prayers. The Liturgy also has in colors a symbolically expressive power and is therefore an expression of the faith. White expresses something else than black or (even in the Novus Ordo) violet. Whoever wears WHITE against ecclesiastical specifications, will express the resurrection of the dead. An intermediate state of the soul (Purgatory or the Beatific Vision) in expectation of the bodily resurrection at the return of Christ and the Last Judgement is denied.
Posted by Tancred at 9:00 AM