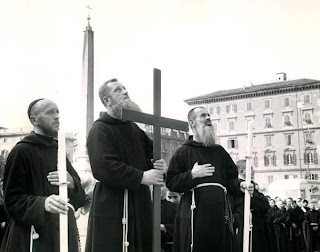 Decline and Fall:  Fifty years after the end of the Second Vatican Council, the lame and poisonous fruits have been yielded by the Conciliar Church.

(kreuz.net) What was reported in April, happens now.

The Capuchin Cloister in the south Hessian city of Dieburg will extinguish its lights at the modern feast of Christ the King.

With that ends the 400 year history of the Cloister.

The suit and tie priest Mathias Doll (69) -- who is active as a priest in Schmerlenbach near Aschaffenburg -- also belongs to the convent.

The website of the Diocese of Mainz cited the guardian of the dying cloister on November 7th:  "When one went away before, another came along."

Today none are coming.


Fall into the abyss

At the Council there were 850 German Capuchins.

Today there are about 150.  Most of them are of retirement age.

The Council was to "renew" the friars with its grandiose claims.

The Capuchins have only four novices at this time in the German speaking areas.

The Capuchin Convent of St. Joseph in Munich will be the next to be closed.

Two other closings are planned.

like ALL monasteries in Western Europe, they refuse to continue to exist, although there are many solutions : invite monks, sisters, brothers from overpopulated monasteries in Poland, Africa, Latin-America, Asia. Some have done it and survive. But most refuse this solution, in their egoism and modernism they destroy their own convents. And the bishops wear also kilos of butter on their heads in this matter