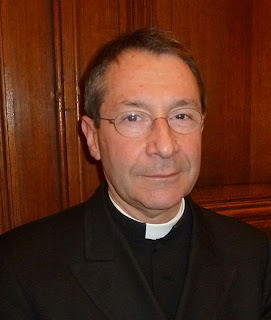 (Rome)  From the 1st to the 3rd of November the first great international pilgrimage of Tradition since the promulgation of the Motu Proprio Summorum Pontificum to Rome will take place.   The pastoral assistant of the pilgrimage is the French priest, Abbé Claude Barthe.  During the International Pilgrimage the Immemorial Mass of All Ages will be celebrated by three high dignitaries of the Roman Curia,  Antonio Cardinal Canizares Llovera, Walter Cardinal Brandmueller and Curial Bishop Giuseppe Sciacca, the General Secretary of the Governorate of Vatican City.  The Pontifical High Mass at the conclusion of the Pilgrimage in the St. Peter's Basilica will be celebrated by Cardinal Canizares.

Abbé, there are requests of your person from several sides. Would give us a brief resume of your education and vocational path?

I was born in Fleurance in 1947 in south western France.  My priestly vocation went back to my Catholic childhood. I studied at the Catholic Institute of Toulouse as a Diocesan seminarian.  The post-Concliar Revolution forced me therefore to leave the seminary.  I then received a degree in History and Jurisprudence.  I felt so bound tot he traditional liturgy, that I entered into the Priestly Fraternity of St. Pius X in Econe.  In 1970 I was ordained a priest by Archbishop Lefebvre.  I belonged then to the "hard" wing of the Traditionalists, but I became increasingly Roman and finally a diocesan priest.   Today I am an instructor in the subject of Liturgy in a seminary of Tradition.  One could also say that I am a "published  priest" because of my numerous, perhaps too numerous books and articles.

How did this idea of a pilgrimage of Tradition take place and how were you selected as the pastoral assistant?


The idea of a pilgrimage and for a Traditional Mass in St. Peter's Basilica for the "People of Summorum Pontificum", as well as the diocesean and also the communities, along with the SSPX, has been in existence for about a year in the so-called Roman circles of the "Reform of the Reform",  who really see in the extraordinary form of the Roman Rite,  a supporting pillar for true Liturgical renewal.  Because of the very diverse roles of a Pastoral Assistant they probably thought of me, because I was seen as a party follower who sees "unity in all living powers", a kind manner of border runner between all directions of Tradition.

On the 10th of September you held a press conference, which announced the Pilgrimage.  Could you tie together some of the central aspects?

In the first line I wanted to establish that it would be a pilgrimage of thanksgiving.  The pilgrims will offer above all a thanksgiving Mass in the extraordinary form and and as support for the Holy Father on the 5th Anniversary of the promulgation of the Motu proprio Summorum Pontificum, which is generally known to have come into power on September 14th, 2007.  For many diocesan -- and religious priests who offer their daily sacrifice of the Mass in the extraordinary form, it acted like a spiritual victory, even for the faithful who -- still sadly too few -- parishes, who could feel joy at this Liturgy and its mysticism.   One can say that in this decision by Benedict XVI.  an entire Summorum Pontificum-people was created.  This people will thank him for this.

And how about the other aspects?

I must say that it also will act as a recognition of loyalty to Peter.  The second reason is to announce our love for the Church and our loyalty to Peter, just as and especially in this current time of a bitter and difficult situation.  We are full conscious that the efforts, which the Pope has confronted has been difficult.  The Traditional Roman Mass, especially the High Mass, will always be a wonderful sign of faith of the Church as Mater et Magistra:  it is this Liturgical recognition which we bring to expression at the tomb of the Apostle, for the successor of Peter.  It will be a gift and a plea.  We will especially offer a gift to God, to ask him for graces for the reigning Pope, in order for him to continue his wonderful work, which he has completed since the beginning of his pontificate, especially today in the midst of cross and trial.

The pilgrimage is taking place along with the opening of the Year of Faith, is there a relationship between the two events?

Naturally.  Our pilgrimage will also express our participation in the mission of the Church.  Would would like to introduce the contribution of the always youthful traditional Liturgy for the New Evangelization, which the Holy Father is asking for during the Year of Faith.  It is clear that this is an initiative with the support of a large number of families, and that it is a source of increasingly larger numbers of religious and priestly vocations, something, which has shown itself as proven to extremely valuable in the Western world at present.

It appears that has not sufficiently considered this completely other vocations "crisis", which the institutes of Tradition are experiencing, in which they are forced to refuse those waiting for priestly office because of a shortage of places and facilities, a crisis which is the exact opposite of the Diocesan.

I would even say that one must especially stress this point.  By the grace of God, the Traditional Liturgy promoted without filling all the holes,  there has been a significant growth in vocations in certain countries like France and the USA -- still, the phenomenon could widen itself.  In France for example there are 710 diocesan seminarians against 140 seminarians (50 from the SSPX) in seminaries of Tradition,  this corresponds to 16%.  This relationship also effects those who are ordained to the priesthood.  This year there were 21 new priests of tradition against 97 diocesan priests.  Additionally there has been a complete transformation and realignment of the diocesan clergy.   The young dicoesan priests and the seminarians of the diocese are drawn to both forms of the Roman Rite and say this quite openly.   It is not to underestimate if the same goes for Ffrance, that a third of the diocesan priestly candidates could be described as candidates for Summorum Pontificum.  "Le petit people", as one says in the French, the simple faithful, stand by the Holy Father to follow the mission of the Church.

How do you explain the criticism and irritation about the pilgrimage, which has come from certain circles?

I can tell you that I have recommended that the organization committee is formed around Una Voce, because it works for unification, which is held int he world of Tradition as "neutral" and therefore liable to have the least criticism.  The conflicts and directions within the groups of Tradition considered, it seemed a good idea, to support them first by a hastily established committee,  in order to avoid jealousies and rivalries.  Some critics appeared from the worry in the success from it that a new organization could be created, which would encompass the entire world of Tradition.  If that had been our intention, we would surely have already succeeded to make the earth square.  I think that around the earth in the meantime have the understanding that we have solely organized a modest organizational committee for this event, which will direct the pilgrimage and dissolve on the evening of the 3rd of November.

What message do you want to finish this interview with?

I don't want to finish with theological words, but with those which the faithful can understand that the Holy Mass on the 3rd of November is a giant "parish Mass" of Catholics from the whole world, who come in order to be together with the"Universal Pastor", to pray with the Pope.  They want want to be together for him and to pray with him in the Gregorian Latin Liturgy, which out of their very own understanding is a community Liturgy.


Abbé Claude Barthe was born in 1947 in the Archdiocese of Toulouse, studied at the Institut Catholique de Toulouse from 1964, where he acquired a degree degree in history and in civil law. In the post-Conciliar upheaval he adopted traditionalist positions and entered the seminary of the Society of St. Pius X . in Econe Switzerland. In 1979, he was received by Archbishop Marcel Lefebvre, founder of the SSPX priest. Because of sedevacantist positions he was expelled from the SSPX in 1987. He was among the founders of the magazine Catholica, which he edited for several years and is one of the sharpest critics of the Church crisis, the brilliant theologian and liturgist the took a teaching position at the seminary of the Institute Bon Pasteur. After years of a canonically unclear status, Barthe approached together with the founders of the Institute Bon Pasteur increasingly to Rome and finally returned back to full unity with the Holy See. In 2005 the canonical status was finally resolved by a decision of the Pontifical Commission Ecclesia Dei, and he was issued a Celebret. He now teaches Liturgy at the seminary of the Institute of Christ the King and High Priest. Abbé Barthe has written many books that are not available in English.

Defanged and given a bone.

Catholic Traditionalists in full communion with the Church are to offer Holy Mass at the Vatican today preceded by a procession . Most of them assume there are visible cases of the baptism of desire and being saved in invincible ignorance, which are explicit, known exceptions to the thrice defined dogma extra ecclesiam nulla salus , the Syllabus of Errors and Vatican Council II (AG 7, LG14).

They cannot proclaim that the Catholic Church is necessary for salvation for all in the Year of the Faith because they assume that we can see the exceptions saved with the seeds of the Word(AG 11) and a good conscience (LG 16) etc.This is a public rejection of the dogma on exclusive salvation, the Syllabus of Errors and the Council.Mass will be offered and the Eucharist will be received.

Then they say Vatican Council II contradicts Tradition.Of course it will contradict Tradition if you use a false premise. It's irrational to say we can see the dead who are saved and now are in Heaven.The Council must emerge modernist when you use an irrational theory.

I will not be there.Today evening I will attend Holy Mass in Italian where the community makes the same mistake.-Lionel Andrades in Rome

At least one of Fr. Barthe's books is available in English: Beyond Vatican II: The Church at a New Crossroads, trans. Deborah B. Cole (Roman Catholic Books, 2006).