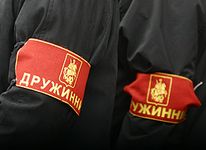 Edit: Remember when Militia became a boogeyman in the US media in the early nineties?  Well, this is Russia and everything seems to be wildly different here. In addition to making anarchist riots by prostitutes and blasphemous derelicts increasingly unpopular, Russians are overwhelmingly behind the idea of forming religious Militias to defend holy sites.

So, they're not just naming submarines after Saints and making films celebrating reactionary political figures, the Russians are taking it to the streets as it were.  To be sure there will be much hand-wringing in the West.  Or will there be?

It's really not much of a stretch to go from this to forming military units to provide security, medical and material support for Christians in the Holy Land, is it?


Moscow, October 18, Interfax - The majority of Russians questioned in an opinion poll expressed support for a proposal to organize Orthodox Christian militias for the declared purpose of protecting holy sites.

The idea was backed by 66% of respondents in a survey carried out by the All-Russia Center for Public Opinion Studies (VCIOM) last month.

The initiative to form militias for patrolling city streets, put forward in August by the leader of the Holy Russia organization, had the widest support among respondents who support the ruling Yedinaya Rossia (United Russia) party - 71%, - among those are older than 45 (70%), those who are poorly educated (73%), those living in cities with populations of more than a million and those not using the Internet (72%), VCIOM experts told Interfax.

Tancred, I think religious militias to protect churches and holy sites are a wonderful idea! They would come in handy if a bunch of militant fags tried to desecrate a church in the US. BTW, why is there an ad on TEF promoting the Anti-Catholic heretic Herbert Armstrong? Can you get rid of it?

If you have a URL I'll block it immediately.