Edit:  So, the new CDF was overstepping his mandate. It seems to us to be a slap in the face.

After the expulsion of Bishop Richard Williamson the Vatican Commission Ecclesia Dei sent a Communiqué. 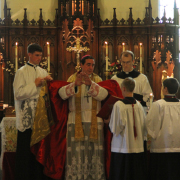 (kreuz.net) Today the Papal Commission 'Ecclesia Dei' sent a  clarification on the negotiations of the Vatican with the Society of St. Pius X.

The clarification recalled the Dogmatic discussion between the two parties.  Then it is to have given discussions about the reconciliation.

The text recalled "other decisive steps" like the freeing of the Old Mass in 2007 and the lifting of the excommunications of the SocietyBishops in 2009.

A handing over of the most recent edition of the Dogmatic Preamble of 13 June 2012 and  of the offer of a canonical normalization signified the declaration as a as a point of culmination.

At the moment the Holy See is waiting for an official answer to these documents by the Society.

After thirty years of separation it is understandable that time is necessary, in order to sort out the significance of the most recent developments.

Benedict XVI. wants to strengthen the unity of the Church by the reconciliation of the Society.  Now clarity, patience, perseverance and faith is needed.

Is God's Church at Her Last Stand?

What the statement of 'Ecclesia Dei' ignores:  The Society has made clear in some statements, that the Dogmatic Preamble of June 13th would not be acceptable.

Their terms for further negotiations are on the table.

Furthermore the German District Superior of the Society, Father Franz Schmidberger, in the middle of September, explained that to his knowledge the Vatican had been answered.

The CDF of the Pope, Archbishop Gerhard Ludwig Müller, who personally hates the SSPX, has ended the dialog for his part in several interviews.

To me this reads as a whack to Mueller for speaking on this subject as though he was pope when he had no Authority to speak. At all.

I'm wondering if it was the Williamson expulsion that opened the door to this communique. If so, it would seem that the ancient "fear of the Jews" may be the stumbling block between Rome and the Society. And if that is in fact the case, God help us.