Traditionalist to Replace +Bruskewitz and Discipline in L.A.

Update: one reader also informs us:

Some more details about Bp. Conley: He was college roommates with Fr. James Jackson, F.S.S.P., and has com to our parish several times to say the TLM and administer Confirmation. He also celebrated the first Pontifical Solemn Mass in over 40 years at Denver's Cathedral of the Immaculate Heart. I believe he's also done Ordinations for the Fraternity.

Edit: It's not Fabian Socialism, it's His Lordship, Bishop Bruskewitz. There are a couple of new appointments and Episcopal acts which are encouraging.  The first one is the appointment of the new Bishop of Lincoln Nebraska, who is probably a Traditionalist. We are told that he spent a period of discernment at Fontgambault and was a student of Dr. John Senior who was close to Monsignor Lefebvre.

The news was reported by VIS.

Additionally, in the Archdiocese of Los Angeles, Archbishop Gomez has stepped up and taken care of some dissidents. 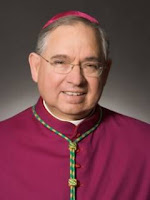 LOS ANGELES, September 14, 2012 (LifeSiteNews.com) - A priest who helped found a gay ‘marriage’ advocacy group for Catholics has been suspended from distributing the sacraments or representing himself publicly as a cleric by his bishop.

The National Catholic Register reported Monday that Archbishop Jose Gomez of Los Angeles had spoken to Rev. Joseph Palacios, co-founder of “Catholics for Equality” (CFE), a small group created two years ago with strong connections to the Human Rights Campaign.

Palacios described the purpose of his outreach at Princeton University in February 2011, where he called the Church’s faithful the key target for effecting cultural shift in favor of homosexuality.

I'm not clear on what you are saying about Bishop Bruskewicz. If memory serves, I believe he was the very first bishop to ever speak up against something ugly and un-Catholic taking place. Don't recall what it was but seems it was about eight or ten years ago. So is he a good witch or a bad witch?

Bruskewitz wasn't perfect, but all in all he was a good man, and he did good things in Lincoln.

He was also far above the typical mediocrity wearing episcopal robes that Rome has seen fit to inflict upon us.

Anon, it's a failed attempt at humor, apparently.

Well heck. I never was good at "getting" a good joke. Mea culpa. :(

If anything, Bishop Bruskewitz was turning back the clock inch by inch over decades.