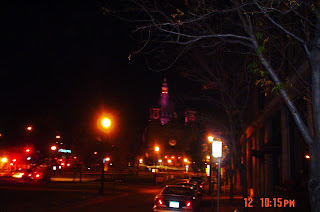 Edit: In the past, the Lavender Basilica has been resisting the Archbishop's initiatives, keeping an ambiguous presence at Minneapolis' depraved Gay Pride Festival and fostering an atmosphere of disobedience to the Archbishop and opposition to the Catholic Church's teachings on a variety of issues. On Friday, there was a giant puff piece giving a lot of attention to some of the usual suspects on the subject of the Defense of Marriage Act that is up for a vote in the state of Minnesota in the anti-Catholic 'MinnPost'.   There is some resistance from 17 parishes in the Archdiocese, the most dissident and substantial is the Basilica of St. Mary's, to the Archbishop's initiative, but there is also a loss of nerve.

There is a presence on Facebook of "Catholics" who say "No" , which has a list of parishes resisting the Archbishop, but it only boasts about five hundred souls, many coming from the Lavender Basilica of St. Mary's, which is the Archdiocese's Co-Cathedral.  Yet even at this place, the pressure is increasing and there was a flier included in this week's church bulletin, complained one of the Basilica's parishioners on the Facebook group: 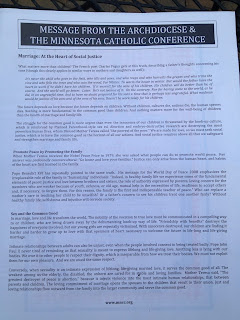 Another dissident is Father Bob Pierson whom the Archbishop doesn't want teaching in the Archdiocese any longer and is keeping his mouth shut for now, except that the Tribune did cite him.


“But the reality is that marriage is not ours to redefine, just as another human life is not ours to take,” the archbishop continues. “God is both the author of life and the author of marriage. It is this most fundamental understanding of the natural order that animates who we are as Catholics. ... It is also why we fight to defend God’s plan for marriage, because his providence is as clear for what marriage is as it is for the dignity of each human life. ...

At present, the Archdiocese has given $1 million to defend marriage, something which should be encouraging to local conservative protestants and conservatives in general who don't want to see society further eroded by such legislation.

There's also no word from the noxious Father Mike Tegeder.  He's not even mentioned in this article.

Bravo Archbishop Nienstedt! We will keep you in our prayers! Mike, Amy, Evan, Jacob, Ava, & Emeric

Keep pushing, Archbishop Nienstedt. We need brave shepherds like you to fight for the flock. You are an example to our children!

Get rid of the dissident, rebellious, disobedient priests!!

God bless you Archbishop Nienstedt. Indeed we need more brave soldiers and shepherds of Christ defending our Catholic Faith. It is time for dissident priests to be removed.

Thank you Archbishop Nienstedt for standing up for Christ The King.

The first step is to close the Basilica, and only keep janitors to maintain the facility.
Secondly, make an example of the dissident priest[s] by firing them with no benefits. They are bad employees, and that is all they are employees.
Maybe we need some 'fire and brimstone' preaching, on the order of St. John the Baptist.
Also, maybe we should not worry about the 'bottom-line' and if there is not enough money to go around because of the preaching, shut things down. Set an example for the current government.
We support you AB Nienstedt by our prayers and discussion with fellow Catholics.

Thank you Archbishop Nienstedt for your courage and good pastoral leadership to defend traditional marriage. I believe this is the issue on which the bishops will face the most virulent opposition. Know that you are the prayers of the faithful who love and support you as you "serve" Holy Mother Church and her children. God bless you

Thank God someone is cleaning up the mess left by the disasters that were Roach and Flynn.

Thank you Archbishop Nienstedt for taking a stand! We are in a spiritual battle and must stay strong!

There is indeed a "new sheriff in town." The good Archbishop gives us all hope for the future.

The last picture (with the rainbow flag) actually shows the Cathedral of St. Paul not the Basilica. It was taken during this event.

Thank You Archbishop Nienstedt for speaking out against the Gay Pride movement in Mineapolis and defending traditional marriage.We recently were on a cruise to Alaska and attended daily Mass on the ship. The priest who said daily Mass was from the St Paul diocese and wore a rainbow flag on his lapel.It wasn't until we got back that I fond out that the flag represented the Rainbow Gay Pride. It is very sad that some of our priests condone this movement.