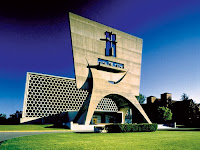 Edit: St. John's Abbey is a decadent religious house of Benedictines, numbering approximately 153 professed monks and belong to the American Cassinese Congregation, founded in 1856 by Abbot Boniface Wimmer, located near the township of Collegeville, and affiliated with one of the oldest Universities in Minnesota.

We'd written something up earlier this year about the winningest coach in football at the most Modernist Monastery in North America if not the world, St. John's Abbey, and how the press contacted John Gagliardi about the Joe Paterno case. They couldn't have asked a better person, since John Gagliardi knows exactly what it's like to cover for sexual predators from his own professional back ground. Here's the article with some links from Pine Curtain:

[Pine Curtain] According to an upcoming report, Saint John’s University football coach John Gagliardi recently admitted that he has been aware of sexual misconduct at Saint John’s since the 1950′s.

In fact, it was Gagliardi’s report to Father Dunstan Tucker which led to a perpetrating faculty member’s swift exit from Saint John’s after a high school recruit (and potentially a minor) from Florida confided in Gagliardi that he had been molested by the faculty member following a tour of the campus.

According to Gagliardi, the perpetrating faculty member later took a job at high school in Saint Paul, Minnesota. It is unclear what steps, if any, Gagliardi took to protect the students at that high school.

Compare this revelation with statements Gagliardi made during an interview regarding the sexual abuse scandal at Penn State that was published on November 9, 2011:

“You don’t want to believe it could happen. Thank God, I’ve never run into that situation. There are some horrible people out there.” [ View]


Gagliardi HAS run into “that situation” before and yet he remains silent, despite his knowledge that at least one of his star football players was a victim of sexual misconduct by a priest at Saint John’s Abbey in the 1980′s. That perpetrating priest remains on campus today and according to the abbey’s web site, is “free to move about campus with some exceptions … free to use the library, the bookstore and to walk the roads and byways on the campus.” [View ]

As this site’s webmaster wrote in January of 2012 [ View ], Gagliardi’s silence regarding misconduct at Saint John’s is a problem — and his comments regarding Penn State scandal, [ View ] Joe Paterno and Jerry Sandusky appear to be even more hypocritical.
Posted by Tancred at 11:37 AM