1567 September 30th and 29th: Protestants Massacre Catholics in the Michelade 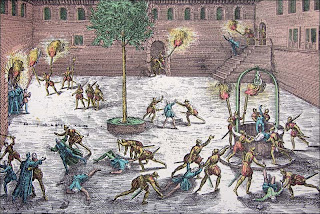 Edit: Like any other Revolutionary movement, Protestantism took up the sword to obtain its illegitimate supremacy wherever it came to power.  It is not remembered, conveniently, outside of France especially in discussions about St. Bartholomew's Day for which it served as a justification.

The Michelade is the name given to the massacre of 80-90 Catholics, including 24 Catholic priests and monks, by Protestant butchers in Nîmes and Languedoc on Michaelmas (29th and 30th of September) 1567, following their failure to abduct the king and queen mother in the so-called, Surprise of Meaux the previous day and in retaliation for the suppression of their Huguenot beliefs.  The name is taken after the feast on which the massacre occurred, after the Archangels.

The September 29, 1567 is the Feast of the Michelade, where a fair was held on the day of the Saint-Michel in Nîmes . Passing near the city, a Protestant merchant of vegetables was insulted by some soldiers and vegetables his trampled. This incident lead to a crowd of protestant peasants and soldiers training companies. Insults and threats were exchanged and turned this crowd into a riot.

The First Consul Guy Rochette, a Catholic, tried in vain to pacify the mob, and was forced to take refuge with Bishop Bernard Elbene. The vicar general and twenty of monks or clerics , were incarcerated. On September 30, 1567, they were kidnapped, killed and thrown into a well in the courtyard of the palace . Men working three centuries later,found the bodies that were piled up at the bottom of the well.

The Rioters also looted Catholic churches in the city, and attempted to demolish the tower of the cathedral by undermining its base. The First Consul stopped this. The Bishop escaped and went overnight at Tarascon , with a Protestant soldier, Jacques Coussinal.

Link to French wiki... H/t: Francisco de Marooned
Posted by Tancred at 9:21 AM